Get on Board or Face Burnination

I've made an executive decision. I need to bring back Homestar Runner. Towards the end of high school and into the beginning of college, this website was the shit. Particularly, Strong Bad Email. As time marched on, I found myself with fewer opportunities to enjoy the site (ain't that always the way?). Before you knew it, it was a thing of the past. Recently, it's as though the fates have been telling me that Homestar Runner & Co. need to return to the limelight. Here are the signs: 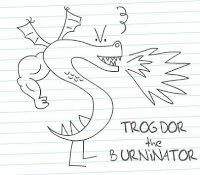 Kick it old school and watch some Strong Bad right now...or I'll burninate you and your thatch-roof cottage.
- July 05, 2010

I'll give you shout outs 'til the cows come home. And, lemme tell ya, I don't think those cows are ever coming back.