I just devoted a significant amount of time (aka procrastinated) to prettying up my blog, so I hope everyone likes it! I made the same changes to my Spain blog as well.
- November 14, 2008 No comments:

I Hate My Job

I took this week off work in order to do some hard core studying for the Spanish Contet Knowledge Praxis test I'm taking on Saturday. I'm dreading going back to work. I knew that I didn't like my job, but I didn't know that I truly hated it as much as I do. I mean, I loathe going there. It probably has something to do with feeling completely ignored and unappreciated.

Not going to work has been one of the greatest times of recent memory. I'd very much like to quit. However, I've finally qualified for health insurance there so quitting without another job to go to probably isn't the smartest idea. I'd like to quit if I do end up going back to school, but again the whole health insurance thing is a factor. Not to mention, as it turns out, I enjoy money.

Speaking of money, not too long ago I realized that I buy a lot of stuff. During a discussion in which people revealed what one thing they bought the most of I discovered that I buy a lot of all of those things. And the really sad thing is: I've cut back a lot. That's the problem with an addictive personality; you can't bring yourself to just half-ass anything. 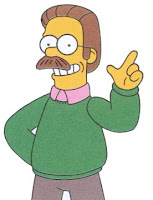 I'm getting sidetracked. What's so hilarious about all these ultra-conservatives vowing to leave the States for our designated driver to the North (Canada) is that Canada is more liberal than America. They have abolished the death penalty, legalized gay marriage and have national health care. This is why it's important to do your research, people. Now that I think about it, there are a lot of countries more liberal than the US--the more developed countries at least. I mean, just look at Europe. The point is I think people would be hard-pressed to find what Ned Flanders refers to as the, "magical land of yesteryear that only exists in the minds of Republicans."
.
And finally, my most recent discovery is that ponies are not baby horses, as I have believed my entire life. I really thought that's what the deal was. Apparently, ponies are an entirely different thing. I'll probably still call baby horses ponies, though. But I also call all dogs "puppies," no matter how old they are. Force of habit, I suppose.
- November 09, 2008 1 comment:

"While we will breathe, we will hope." These words stood out to me as I listened to Barack Obama's victory speech tonight. I remember when I first started hearing about the young senator from Illinois in 2005 or 2006. Somehow I always knew that we would be hearing more from this man and that he could very well be President one day. And I couldn't be more happy with the results of the 2008 election. America has hope again.

It's a bit surreal to have participated in this election. I've been a part of Obama's grassroots campaign since day one...possibly before day one, since I wanted him to run even before he threw his hat in the ring. Recent years have been tough for Americans and it's great to see a renewed sense of optimism in a people who had grown so apathetic over time. We long to restore America's good name throughout the world, and Obama is the man to do just that.

I'm very excited to see the percentage of voter turnout in this election. All day people have been comparing times spent waiting to vote. I arrived at the polls around 7:20 this morning and waited about 30 minutes, which wasn't too bad--some people waited hours. While I waited in line I anticipated hearing complaints as soon as I got to work. However, I had nothing to complain about. If it meant that more Americans actually gave a damn about their government, I'd gladly wait in a line every day.

Every person has days that they will remember forever; days they will tell their children and grandchildren about. Where were you when Kennedy was shot? Where were you on September 11, 2001? It's nice to add a positive memory to those days. I'll never forget anything about the day I saw an African-American man elected to the highest office in the nation. And the fact that I've seen this historic day at such a young age excites me even more. Now we've shown that change is possible. Some day soon we will see a female president, perhaps a non-Christian president or gay president. I look forward to a day when candidates will be chosen based purely upon their credentials rather than their race, gender, orientation, flag lapel pin or middle name.

Obama's acceptance speech was stirring and inspiring. And John McCain's speech was equally as impressive. I believe McCain spoke from the heart when he said that he would serve the new President and hoped they could all work together to make our country better. That's exactly what we need in this country. There's too much partisan bullshit in politics--if we really want things to change, we have to cooperate with each other rather than spend all our time tearing the other person down. McCain's speech reminded me of why I have always respected him.

I'm grateful to live in a country where there is a separation of church and state. I believe that it is when religion and government get together that things start to take a turn for the worse. I find it unfortunate that it seems to be an unspoken rule that the President of the USA must be a Christian. One of the more irrational pieces of propaganda is that Obama is some sort of secret Muslim. First of all, he's not. Secondly, I will remind you, that Muslim does not equal bad. Muslim extremist is often a bad thing. Just as Christian extremist is a bad thing. Any sort of extremism is never a good idea. Imagine if the situation were reversed: we lived in a predominately Muslim country, maintained our separation of church and state, but our president had always been a Muslim. I have a sinking suspicion that we, as Christians, would be saying, "it shouldn't matter what religion the president it." Being a part of the majority often makes it difficult to put yourself in another's shoes.

I'm fully prepared to hear the immediate complaints of the ultra-conservatives; and ignore them. By Obama's second week they'll be shouting that nothing has changed; the economy will most likely still be poor, etc. As the saying goes, Rome wasn't built in a day...and Rome was just a city, we're trying to rebuild our entire country! I think change will take a long time and it won't be easy. But I also believe that we can do it. Yes we can.

And on a side note, I hope Sarah Palin goes back to whatever igloo she crawled out from under and I never have to hear from her (or Joe the Plumber) again.
- November 05, 2008 No comments: