Pinterest is good for a number of things: Hey Girl memes with Ryan Gosling, weddings featuring burlap and mason jars, and healthy lifestyle tips. Sure, I could pin all the health tips and pretend I'm going to do them...but who am I kidding?

The homemade cleanse drink, the workout that goes along with a TV show so that I do 10 burpees every time Maury announces that someone is not the father, and of course the sign for my fridge with a quote about how "nothing tastes as good as skinny feels." I'll get right on that. I'm pretty sure that quote is attributed to Kate Moss and obviously that bitch cray. Nothing tastes as good as skinny feels? Seriously, nothing? Clearly girl has never tasted food.

But I think I'm getting away from my point, which was actually quasi-serious. I saw a pin for the Mama Laughlin website. The pin showed her before and after picture at 198 and 138 pounds respectively. I couldn't resist clicking. She seems like a pretty badass lady and she's funny, too. She talks about how she gained weight and how she finally lost it.

And the next thing I know I'm shaking my head. She talked about the various motivators she had during her weight loss and how the biggest one was watching the numbers on the scale go down. That would be a great motivator for me, too. The problem is, it doesn't happen.

I try super hard and maybe I'll see some extremely minor results but then it's all back. And then I'm just as depressed as I was when I started. So I get this "why bother" attitude. It's all very defeatist and melo-dramatic (which I hate) but I can't help it.

The only difference between now and all the other times is that I have a very supportive boyfriend who likes me just as I am. I still want to improve myself, for me. I just have no clue how (if?) I'm going to make it happen. I'm sure if I keep browsing Pinterest, I'll come up with something (LOL)!

Why Is This a Thing?

One of my more popular boards on my Pinterest is called "Why Is This a Thing?". I'm certain I've mentioned it before. It's full of things I stumble upon that are ridiculous and have no business existing. It goes without saying that I love The Worst Things For Sale. I check the site every day to see what crazy item has been discovered; some days are better than others. March 4, 2013 was a particularly fantastic entry! There are so many things to question about this particular entry.

You're not hallucinating. The title of that book is Vagina Insanity. Sorry for the quasi-scandalous picture; but you really need to see the whole thing in order to fully appreciate this madness. What's unclear is the exact meaning of vagina insanity. Is it just one crazy vagina or just a mad overload of lady parts? I don't know. I suppose I'll have to read it in order to find out--good news is that as an Amazon Prime member, I have the ability to borrow the book for free on my Kindle. And just in time for my birthday!

I really do encourage you to check out the Amazon page for this "book". When you do that, you should check out several things: 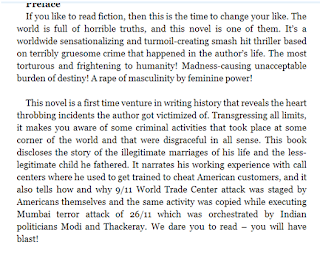 May I draw your attention to the section in which the author claims that this book tells how and why 9/11 was staged by the Americans? Of all the things I expected to see inside a book called Vagina Insanity, a 9/11 conspiracy plot was at the bottom of the list. The only things that would surprise me more would be: Biblical scriptures, parenting tips, and advanced theoretical math. I'd be lying if I said I wasn't a bit intrigued to see how crazy lady parts could play a role in a huge government conspiracy.

Is That Really Necessary?

Good news, I've found something else that annoys me! Apparently the new unnecessary event de jour is the gender reveal shower. We've been building to this for awhile, based solely on my Pinterest observations. Apparently, simply announcing whether or not you're having a boy or a girl is a thing of the past. Now you need to make a big production out of it. This is why I'm not too concerned about the economy. If we have money to throw parties simply to announce the sex of an unborn baby, I think America will make it out of this tough time.

It started simply enough with photo sessions. I'm talking about paying a professional photographer to come and take these photos mind you. You've got a few standard options in case you're interested in doing this:

Just like with any addiction, it wasn't long before mere balloons weren't enough. Enter the gender reveal shower. You can't bring the balloons to the shower, that would be ridiculous (I assume). You have to have a completely alternate method of sharing your baby's gender. I don't know what else you do at a gender reveal shower. For the sake of those in attendance, I hope games are not part of the equation. I'm not certain whether or not there are presents...but if there aren't, I'm sure those will follow soon.

In the end, people can do whatever they want to do in regards to this type of thing. But I find it all to be very silly. It all makes me think of the episode of Sex and the City where Carrie goes to a baby shower and the uptight parents make everyone take off their shoes and then Carrie's shoes get stolen, because hello free Manolos! At first the woman offers to pay for Carrie's shoes but when Carrie reveals the extravagant price the friend flips out and refuses to pay even though she used to buy Manolos in her pre-baby days. So Carrie starts adding up how much money she has spent celebrating the love of this couple; an engagement gift, a wedding gift, the cost of traveling to and staying overnight at the wedding, and the list goes on and on. She figures that all-in-all she's spent well over $1,000 on these people. She makes a good point in that not only do these people get love, happiness, and a family but the rest of us (many of whom do not have these things) have to give them presents on top of everything!?

Spoiler alert: Carrie sends an engagement announcement to the girl saying that she is marrying herself and that she's registered at Manolo Blahnik. The girl realizes she was being a bitch and buys Carrie the shoes and the girl working there gets on the woman because her kids are trying to touch the shoes. It's a quality episode.

That's how I feel about the abundance of showers and events for engagements, weddings, babies, etc. It really starts to add up and it's hard to not wonder what the point of it all is sometimes.

My other random thought actually started turning into a post of its own, so it's coming up next!