I'm so glad I've chosen a career that includes thirteen billion days off. Shaping America's youth requires a lot of breaks. So here I am, enjoying my first [paid] Spring Break. I spent the first couple days dog-sitting in Richmond, which does not typically provide a lot of blog excitement--unless you count the additional time alone with my thoughts.

Yesterday, I had to drive up to Lexington to get some lab work done at the doctor (sadly, your favorite blogger requires cholesterol checks).  I drove up around 10ish AM and noticed that the opposite side of the interstate was completely backed up! Eventually I saw the cause, a jack-knifed tractor-trailer. Although my lab work would only take a few minutes, I figured I'd stay in Lexington for a bit rather than sit on the interstate. So I called up a friend and we had a long, leisurely brunch.

I just stared at it, for a multitude of reasons: The main reason was that you don't typically see something like that on the side of the road. The other disturbing thing about this sight was the sheer size of it. This thing had some girth to it...and I'm terrified of the person who had been using or was going to use this item. Terrified.

Not too long ago, I found myself at a gathering of friends...one girl had gotten engaged the week before. And that's fine. I wish I could say that I was shocked to hear that a second girl had gotten engaged since then. But I wasn't--for you see, this is how my life works. Now, for those of you keeping count at home, that's 2. 2 people in 2 weeks. While I'm super excited for them, you've got to be freaking kidding me!
It was at that moment that I knew I needed some ice cream.

Amy and I made our way towards the McDonald's on UK's campus. "Should we go through the drive-thru or go in?" I asked. We decided to go in...because we never go in. What an exciting change for us. Or was it?
We were having an awesome time, because that's what we are. Awesome. There was a sign on the wall that limited time spent in the restaurant to 30 minutes. I clearly remember thinking, "What an interesting sign." As we sat, eating our delicious sundaes I saw a crazy-eyed man. As he was walking towards us, that's when I remembered that I needed to "look for my chapstick in my purse thus bringing my purse into my lap." That's when he sat down.

Drunk McGee: I'm just trying to do something nice.
Amy: Hi.
DM: qweuoinkstklgfnjkesfkls.[to me] You're pretty.
Me: Ummm...thanks. [Inner monologue: Wow, this is super creepy...but then again, I can't think of any guy telling me I was pretty (while sober) ever. A girl could get used to that].
DM: widnagitnssjlenfl tattoos sfsnnfkfjklsgopwnbfsr Can you do me a favor?
Me: [hesitantly] OK
DM: [to Amy] She's pretty.
There is some dispute over what was actually said here, I thought he was telling Amy that she was pretty. Amy thought he was asking her to comment on me being pretty.
Amy: She is. [awww, thanks Amy]
DM: Can you do me a favor?
Me: Yea. What?
DM: wivcklglkdbiu Can you give me 50 cents?
Me: OK.
I give him the money, under the silly impression that he would then leave. He then puts the money in his pocket. As though I was being charged for his company. Amy yawns--because Amy is a genius.
DM: Are you tired?!
Amy: Yea...I think we're gonna have to head out.
We exit McDonald's
Amy: And that's why we don't go inside.

Although we have plans of returning to that McDonald's any time soon...if another person shows up engaged in the not too distant future, I might give him another chance. One of my co-workers is already familiar with Drunk McGee, as she has seen him at that same McDonald's. I began describing him and she accurately finished the description.
- March 26, 2010 No comments:

This is a super-mini post before I get in the shower to get ready for church. I'm almost always amused when I glance at the ads on the side of my Facebook page. It takes information from your profile and tries to tailor the ads to your interests...pretty smart I suppose [in theory]. 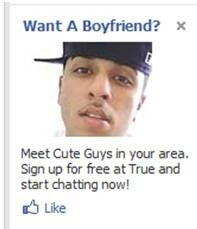 Since I'm single [and ready to mingle], many of my ads are for dating services. Usually the guy in the picture is 1000x hotter than any guy who would be on any dating site, but whatever. Sometimes the ads get particularly specific as well. For awhile, I kept getting an ad for Catholic singles...I'm not Catholic. This morning, for the first time, I saw this ad.

I have several issues with this ad. One, the guy is not cute. Two, his hat is on sideways...and I think he's serious about it. And three, the text of this ad is generic, "meet cute guys in your area". How is is not, "Holla atcha Boy" or "Meet a Boo in Your Area"? And I'm not saying this because he's black...it's the sideways hat. Anyone wearing their hat like that is not to be taken seriously. And they probably talk like Lil Wayne. Don't get me wrong, I enjoy a Lil Wayne song as much as the next person--but I'm not looking to date him.

If the "cute" single guys out there look like the guys I teach...we have a problem and I suppose I'll just stay single. If only there were a "dislike" option at the bottom of this ad.
- March 14, 2010 1 comment:

An Array of Strange Things

Lately I've been noticing all these weird little things. So I've been taking pictures of said things...and I've decided to discuss them right now.
The first item up was something I observed while in my car the other night. XM radio always tells me who is singing the song, but never before have they told me how to pronounce the name. It would really come in handy these days with Iyaz, Ke$sha, Orianthi, etc...

Up next, I was so relieved to discover that I'm not the only one who's thinking of this. Has anyone noticed how hard Eminem sucks lately? Remember back in the 8 Mile days...he was talented. And now, every song sounds the same--all whiny and obnoxious. I'm shocked that Dr. Dre still associates with him...I know I wouldn't. 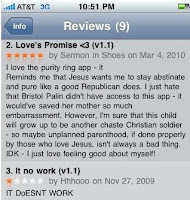 So I'm perusing Texts From Last Night on my phone before I went to bed (as I do almost every night) and I stumble across this. Purity Ring app? Really...that's a thing? You'd better believe I looked that up. And it is. There is a Purity Ring app you can download for your phone (after you pay the $0.99). What does it do you ask? Well I'll tell ya. It just shows a picture of a ring that says purity. Clearly, it's a wise financial decision (even in these tough economic times). While I was checking out the app itself, I decided to look at the reviews.

The first app is simply insane. I can't tell if this person is serious or not...the 5 stars makes me think that they're serious, as does the username "Sermon in Shoes". I love the next review--all it says is that the app doesn't work. Do they mean that the app itself does not function, or do they mean that the app did not help protect their virginity? I kinda hope it's the second option there. If an iPhone application can't protect your virginity, what can?
- March 07, 2010 No comments: