Higher Education in the Wizarding World

My last post dealt with a super serious topic, so I thought I should post something lighthearted to balance it out. A few weeks ago or maybe it was months, I don't know because it all runs together, I was behind a car with a Harry Potter bumper sticker. You'd better believe I was all over that. 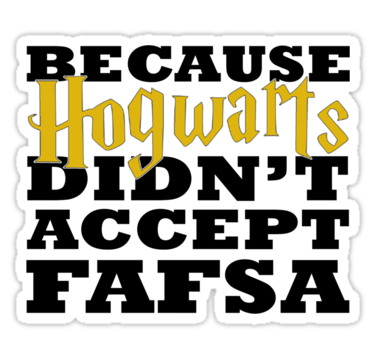 Obviously I found this amusing, but then I decided to spend a significant amount of time thinking about it (that's what I do). My over-thinking led to a number of questions:

Technically FAFSA applies to post-secondary education and that's not what Hogwarts is. Hogwarts is a secondary school. If you want to get bogged down in semantics, this bumper sticker is inaccurate. But it brings me to my main quesstion: Why is there no higher education for wizards? I can't imagine that sat well with Hermione Granger.

Seven years of schooling and you're done. That's all the education you need as a wizard. You're 18 years old and nobody thinks you should maybe go to some more classes? Not even to do something really specialized, like be an Auror or a Professor? That means that by the end of their time at Hogwarts, Seamus Finnegan and Neville Longbottom had the same level of education as Albus Dumbledore. Sure he had decades of life experience, but they had taken all the same classes.

I'm required to have a Masters and all I teach is Spanish, I don't even get into levitation, transfiguration, Dark Arts, charms, etc. If I were going to send my kid off to learn all of that stuff I'd feel more at ease knowing that the teacher had more than the wizard equivalent of a high school diploma under his hat.

For the record: I would go to Hogwarts today if an owl showed up at my house. Same goes for my future children, I'm so down with them attending Hogwarts and learning magic.
- July 03, 2014 No comments:

My Letter to Hobby Lobby

I know I'm not the only person who's doing this, and some of you might be sick and tired of hearing about the Supreme Court ruling by now, but I can't not give my opinion on this matter. I'm not going to apologize. And I'm not going to tell you not to read it. You should read it. This is a big deal.

So, you're a person now. You have religious beliefs. And you don't have to pay for your employees' contraception because doing so violates those religious beliefs. How many sleepless nights has this whole ordeal caused you, Hobby Lobby? I'm surprised you've been able to maintain normal business hours during such a trying time. You brave little soldier, you.

I'd like to take this time to tell you about why I use contraception. Now, it might get a little awkward...to be honest, you're the first craft store I've discussed my lady times with. I don't make a habit of working these types of things into regular conversation, but since you've made the reproductive rights of your female employees your business and participated in setting back women's rights, I figured I'd make an exception.

I started taking birth control when I was 18 years old. I am now 29 years old. Now I know what you're thinking, Hobby Lobby: What a whore! Believe it or not, preventing pregnancy is not why I'm on birth control. As a matter of fact, I am a Christian who goes to church on a regular basis--are you shocked that we don't share the same "closely held religious beliefs"? Prepare to be shocked yet again! I am currently engaged and planning a wedding for next fall. Most people assume that my fiancé and I are sleeping together or that we're going to move in together before we get married. Nope. Wrong on both counts. I don't typically volunteer that information or correct people who make the assumption, not because I'm embarrassed but because I don't care what people think and it's no one's business but mine and my fiancé's. The only reason I'm sharing it now is to prove a point: Not everyone using some sort of contraception fits into the small-minded, preconceived notion that you created.

I don't know how much you actually know about periods, birth control, or women in general, Hobby Lobby; but based on the fact that you took this case to the Supreme Court, I'm going to assume you know very little. Periods are supposed to come once a month and last for 3-5 days. Prior to taking birth control, mine were never like that. Sometimes a period would last for a really long time (my "record" was 3 weeks). Sometimes it would be so brief, it's like it hadn't even happened. And then I would go months with nothing.

Initially I didn't complain much, I was never the Are You There God, It's Me Margaret type of girl who longed for her period. But the fact that I never knew when the freaking thing was going to show up, was starting to piss me off. I'm glad I did finally tell my doctor about these issues because I found out that it could be the sign of and/or lead to bigger and more serious problems.

Irregular periods can be caused by something as basic as stress to uterine polyps, Endometriosis, Polycystic Ovary Syndrome, and premature ovary failure. Additionally, if you aren't having a period every month, it means that your uterine lining is not being shed every month (like it should be) and can increase your risk of uterine cancer. So my doctor put me on birth control and it's been smooth sailing ever since. So it's not all about preventing pregnancy.

One of the specific contraceptive devices you won't be paying for is the IUD. Some people consider an IUD to be more abortion-like than traditional birth control. I'm just going to throw this out there: some women are not able to use traditional birth control (pills) and thus an IUD might be their only option. Since you think IUD's are so evil, I should probably alert you to something: Your employee retirement plan is invested in mutual funds of companies who actually make emergency contraceptives and IUDs. Roughly 75% of the retirement plan as of December 2013, if you want to get technical. I thought I should tell you about this because since your "closely held religious beliefs" are so important to you, I know there's no way you would've knowingly allowed this to happen. Knowingly investing in these companies while filing a lawsuit refusing to pay for the products they make would negate your entire argument. It would imply that all this comes down to is money. Saving money wherever possible, at the cost of women's rights. But I know that's not what happened here, so now you can go and correct that grievous error!

My main purpose of this letter was to introduce you to the variety of functions of birth control. But I'd also like to take this time to tell you that I will no longer be shopping in your store. I don't know that I'd take the time to tell a corporation that, but since you're now a person, you deserve to know. It won't hurt me one bit to become exclusively loyal to Michael's. Michael's is open every day of the week, and they give teachers a 15% discount. That's right Hobby Lobby, I'm a teacher. Teachers buy a lot of craft stuff. The average teacher spends $1,000 of their own money on their class/classroom each year...and you don't even give them a discount? Well, no matter! Really, the main reason I found myself at your store was convenience. It's closer to my house than Michael's.

I hope you are being flooded with similar letters, Hobby Lobby. I hope other people are pledging to never return to your store. Women's rights took a step backwards when you received your ruling and that hurts me. Any time someone else thinks that they know what is best for my body or the body of any woman, hurts me. Whenever someone thinks that they deserve to have a say in my medical decisions without my consent, it hurts me.

This is not about me being a liberal, a Democrat, pro-choice, pro-Obama, etc. This is simply about me being a woman. Ultimately, the ones who will be hurt by your actions are women, from all walks of life.