Are You My Mother?

Has anyone ever read the children's book by P.D. Eastman, Are You My Mother? It's about this little bird who loses his mother and he goes around asking all sorts of animals (and a steam shovel) if they're his mother. I had a similar experience with Amy Jo recently.

One morning, I'm getting ready for work and I realize that Amy Jo isn't up yet. So I go into her room (much like she did the morning of my first snow day) and say, "Um, should you be up now?" She explained that she had an eye doctor appointment and that she was listening to Bob & Sheri and that they had the Jersey Shore people on. I thought little of it, and went on to work. The next night, we were watching our usual Thursday night line-up and as Thirty Rock was ending, the DVR alerted me that Jersey Shore was about to begin recording. And that's when she said it. The most disturbing words you can ever hear your mother utter: "I think I'd like to watch Jersey Shore."

After I put my eyes back in my head, I began the following conversation:


Me: Seriously?
Amy Jo: Well, they were on Bob & Sheri and "The Situation" was kind of funny.
Me: OK. We can watch it, there are several hours worth on the DVR. But I must warn you--you will get dumber. I almost forgot to read.

I went on to explain the show to her...and somehow, she remained interested. Fast forward to the next night: I'm getting ready to meet up with my old college roommates. I leave her on the couch, watching an episode of Community (BTW, it's hilarious. If you don't watch it, you should!) and go shower, etc. I come out to model one of my ensemble options and that's when I notice that she has moved on to Jersey Shore. By the time I left for the evening, she was half-way through an episode. I expected to hear, "Oh, this is terrible! I can't watch this," but no. I was surprised, but I knew she wouldn't last much longer, and I left. Imagine my shock almost 3 hours later when I receive this text message:

That's right. My mother loves Jersey Shore. Just let that sink in for a moment. Insanity. She loves it so much that she basically told me to stop texting her because she was trying to watch it. Sadly, she was already in bed by the time I got home so I had to wait until Saturday morning to ask her about her experience.

I get up, and she's referencing the show and it's awesome. I'd needed to catch up on some episodes, but I'd been putting it off because I didn't want to do it with her around...assuming that she'd identify it as the trash that it is and get all "mom" on me. While she was working on whatever she was, I flipped on the TV and started watching.

As you'd expect, I was sucked in. Eventually, she finished whatever she was working on and joined me on the couch. And then she's saying things like, "Oh, wait until you see what Snookie does next!"

At some point during our approximate 9 hours of TV watching (we threw in an episode of House, too) I looked at her and said, "Do you realize that you have now watched most of these episodes twice in less than 24 hours?" It was simply astonishing. I should also mention that we didn't move from the couch all day. I didn't shower until 8 PM...it was glorious.

Once we'd cleared the DVR of all the episodes I had stored up, we decided to watch the reunion. At some point, she decided to take the dog out and she said, "You'd better pause it because I don't want to miss Vinny!"

And then, the next morning, she wanted me to save her a seat at church. I jokingly texted back, "No. Never." And that's when she threatened to "kick my ass, Jersey style." I almost peed a little.

It was a strange couple of days to say the least...I'm still processing it. We've been walking around the house doing Jersey Shore impressions and referencing the show right and left. Every time I hear my students mentioning the show, I think, "my mother likes that show...I bet none of their mothers watch that show with them."

We have both used a Facebook app to pick out Jersey Shore nicknames for ourselves. You can call me, "The Rack".
- January 31, 2010 No comments:

In case anyone was wondering what it was like to start teaching mid-way through a school year, allow me to fill you in: it's crazy! I feel like I've been non-stop busy ever since my first day. There are all these other things I want to do (i.e., blogging) but I just don't have time. I suppose the beginning will be like that just because I have to set up a lot of stuff, plan lessons, etc. It won't always be so crazy! Despite the craziness, I'm still really happy to have a job and am enjoying what I do...which is a new and foreign concept to me! Here are some upcoming blog topics:
There is an alleged blizzard to come this week...perhaps I'll get some unexpected free time.
- January 25, 2010 No comments:

Over the holidays, a friend stopped by for a visit and I explained the whole crazy Facebook situation that went down back in September. She thought the name sounded familiar but couldn't place the girl--that's when we decided to see if my friend was friends with her on Facebook...and she was! Naturally, we snooped about for a bit. And then it occurred to me: Had she made any status updates about me?
It took awhile to find, because she had a lot of updates...but we finally found it. To be honest, I expected something crazier: 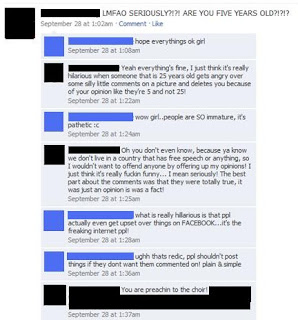 My favorite part is where her friend mentions how ridiculous I'm sorry, "ridic" it is when people flip out over things that happen on Facebook. I couldn't agree more; for example, someone flipping out when they're defriended. There was also an update after this one about "being so sick of someone" and how she couldn't wait to be "far away from you". My friend thought that status was about me, too. I guess it could be...although, to my knowledge we were never in any close proximity to each other.

Oh well. The point is, she's still on Facebook and appears to have gotten over the injustice of a defriending from me. I guess you reach a point where you just have to pick up the pieces and move on (after you tell someone you hope they die soon, of course).
- January 09, 2010 No comments:

Sadly, this post is not in any way affiliated with the Bring It On cheerleading movie franchise. I'm pretty pumped about 2010. I was hoping to get at least one more post up before 2009 ended, but I got super busy...what with the holidays and getting a real, grown-up, big girl job! Everything has been happening so fast, it's practically surreal...I can't believe I start tomorrow! I'm certain that it will provide many more blog topics for you to enjoy.

I think 2010 is going to be great--things are finally going to start going my way. But I don't want you to worry; there are still a number of things I hate and am upset about so this blog isn't going to get boring. The Back in Black of 2010 will explore a number of new issues: the real world, grown-up jobs, and eventually moving out of your mother's house!
- January 03, 2010 No comments: