A few moments ago, I saw a preview for the newest installment of The Fast and The Furious series. This reminded me of a proud moment of which I feel the world should be aware. It was during the infamous Superbowl commercials when I first discovered they were making yet another Fast & Furious. As though this wasn't awesome enough, the original cast is back for this one! I must tell you that this is not sarcasm--I'm legitimately excited. I like The Fast and the Furious. Sometimes, when I'm driving around I listen to the theme song from 2 Fast 2 Furious (when I'm not listening to Move Bitch, also by Ludacris).

But we are not here to debate the caliber of my cinematic choices; so let's get back to the story.
The preview comes on, and one of my friends said, "Oh my God! There's a third Fast and Furious movie?!" Not only did I need to correct her, but I detected disgust in her voice, so I also needed to defend these fine films.

I've had a lot of proud moments in my life, but defending the Fast and Furious films is up there among the proudest.
- March 19, 2009 1 comment:

Email ThisBlogThis!Share to TwitterShare to FacebookShare to Pinterest
Labels: the fast and the furious 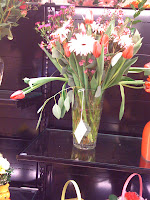 Some of my time at Kroger is spent in the floral department. Much of this time consists of me standing around, thinking of things. Coincidentally, much of my time in the meat department is spent exactly the same way.

This time well spent is responsible for a variety of my revelations; one of the more recent revelations involves the tulip. While making [many] Valentine's arrangements, tulips gave me more trouble than any other flower. They have a quality that makes arranging them a tricky task. 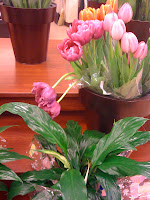 ther flowers, tulips open as they bloom. However, they reach a point at which they just fall over. It's almost like they over-bloom. They open up to a point at which the stem is not strong enough to support the flower. Enter, my revelation: tulips are the result of some form of floral inbreeding.

Wouldn't you think that the inability to support one's head be something that natural selection would have addressed at some point? No such animal would survive in the wild, and yet the tulip continues to thrive.

iPhone has saved the day once again, by snapping a few photos for your evaluation of this evolutionary enigma.
- March 19, 2009 1 comment: