A lot on my plate

I feel like every post I write lately begins with some form of "Sorry it's been so long since I posted, I totally plan to post something in the next few days" and as terrible as that is, that's life. Before you start calling me the worst blogger in the world, let me provide you with a brief summary of some of the things going on in my life right now:
And that's just a sampler. There's so much more. What sucks is that I've been thinking about my blog almost every day. Realizing things I need to post throughout the day is pretty standard for me. By the time I get a moment to jot down the idea (much less actually post about it) I've forgotten it.

To end on a cheesy, inspirational email note: at least I have a job and dog I love! And at least I have readers who promise not to hate me for my sporatic posts.
at August 31, 2010 No comments:

They're in Miami, Trick

Can we talk about Jersey Shore for a minute? As you may already be aware, last year I wrote not one but two posts on this fantastic show. The second season of Jersey Shore started in July. This time the gang is in Miami (because I'm pretty sure the same city could not handle the cast of Jersey Shore for two consecutive years). It's been on the DVR, staring Amy Jo and me in the face for several weeks now. I won't lie to you--we were nervous. What if it wasn't good (in this case, the definition for good is quite different from the standard Webster's definition). Last night we finally decided to (in the words of JWoww) "man up" and watch. I don't want to say it was the best decision ever...but it was a good decision nonetheless.

The whole gang is back and it only took about 15 minutes for the drama to start. And why did the drama start? Because Angelina is back. If you don't know who Angelina is, consider yourself lucky. Feel free to consult the fantastic cast biography chart on Wikipedia. Thanks to this chart, I just learned that I'm older than everyone on Jersey Shore with the exception of The Situation and Pauly D. Anyway, back to Angelina.

Angelina was on the first season for approximately 3 minutes. OK, maybe a little more. She's nothing but an instigator--always stirring the pot and adding drama. Angelina had to leave last season because she refused to work her shift at the t-shirt shop. As I mentioned in a previous post, Angelina is a bartender. And she does (her words) "great things". Not to mention that during the reunion episode we discover that the guy Angelina was dating during Season 1 was a married man. Classy.

No one was sad to see her go. But I think everyone was sad to see her return. And by everyone I mean viewers and the rest of the cast. I was sad for a number of reasons (including those previously mentioned), but to top it all off...we learn that Angelina doesn't know how to properly dress herself. She has been looking a hot mess in every available shot. Sadly, I can't find a picture. Don't get me wrong--I wouldn't look good in those clothes either, that's why I don't buy them. Even Amy Jo borrowed a new term we learned from The Situation and called Angelina a "grenade".

In closing, I would like to say that Angelina has no business being on Season 2 of Jersey Shore and that Amy Jo and I are looking forward to watching the rest of the magic unfold this season. I'd also like to state that the amount of time I've spent not working on things for school but rather writing this post (not to mention searching for crappy pictures of Angelina on Google and learning that Snooki was born in Santiago, Chile) is a little ridiculous.
at August 21, 2010 No comments:

School's Back in Session

First of all, you should be aware that as I titled this post I sang it to the tune of Alice Cooper's "School's Out".

The main point I want to get across in this very brief post is that I've been crazy busy with school preparations, getting ready to graduate with a Master's degree, mentally preparing to start KTIP (Kentucky Teacher Internship Program--a requirement for first year teachers) and whatnot. I feel like I've had very little time for myself (or my blog). I'm certain I'll get into a routine soon enough and get back to more regular posting. 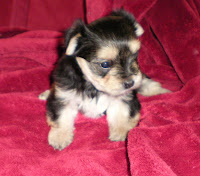 A new topic to look forward to in future posts is definitely Lola. Lola is my dog, or she'll be my dog when I get her in approximately a week and a half. That's another thing that's kept me busy--getting ready for my puppy. Lola is a Morkie (Maltese-Yorkie mix) and I am so excited!

She's a teeny tiny thing. This picture is of her at a month old. She's going to weigh between 3 and 6 pounds when she's full-grown. I can't wait. She's so cute I can barely stand it!

So that's a really quick update with what's been going on in my world. Fear not, Lola and I will find time to write. Amy Jo wants me to have Lola post some entries. I might allow her to chime in from time to time...but entire entries? I don't know about that. I don't want to become the kind of person who sends out email updates about their family and pretends that their toddler wrote it. "Mommy and Daddy are so busy working in the yard but I'm having fun playing in the mud and eating bugs," I don't care for things like that. If that's something you're into...well, fine. I guess that's your right as an American.

This post has turned into a completely different tangent than I had intended. I intended on no tangents; just straight forward: Hey I've been busy, I'll post soon.
at August 11, 2010 1 comment: