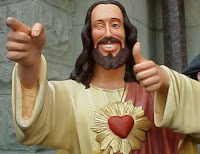 They say that everyone has an exact double out there somewhere; a doppelgänger. Do you think Jesus had one? I'll bet he did. I see guys now who look like Jesus...or what we assume Jesus looked like.

That's another thing, what if Jesus looks nothing like the bearded guy we've become so familiar with over the years? What if we get to Heaven and it's like, "Who the crap is this guy?!" That would be embarrassing. Why do we think he looked like that anyway? There's no verse in the Bible about Jesus' appearance. They didn't have cameras or anything. Just word of mouth, so everything we think we know about Jesus' appearance could be heresay. Even if we did get the long hair, beard and sandals right, I'd bet a lot of money that he wasn't as white as people tend to depict him. It always amuses me to see people give Jesus really Aryan features; like he's related to the Swiss Miss girl or something. That will never stop being funny.
But back to the Jesus stunt double. Do you think he ever got questioned by soldiers, or if people ever followed him looking for miracles? I bet that got annoying. If I had been him, I would've totally shaved off my beard and figured out a way to dye my hair. I'd get tired of everybody saying, "You probably get this all the time--but has anyone ever told you that you look like that one guy..."
Occasionally, I see guys who look like Jesus. Don't ask me why, but I get nervous around them. It's kind of like how I have a hard time trusting really, really tall people...why are they so tall and what are they doing up there? When I see a Jesus-look-alike I find myself saying, "Why does he look so much like Jesus? Does he do that on purpose?"

I have a Jesus Action Figure. He has posable arms and gliding action. The gliding action is just some wheels on the bottom. I've always wished they were like the wheels on some matchbox cars--you know the ones where you'd pull it back and then let go and (through the magic of science, etc.) the car would zoom off? Those probably have a name, but I don't know what it is. Anyway, I wanted Jesus to have those so that I could just launch him at people.