Nancy Drew and the Curious Case of the Mystery Thong

Admit it, you can't see that title and not read this. It's impossible. I don't know how I let it happen. I've had this blog since last year, and there has yet to be a post on the Mystery Thong. It's one of the most random and unexplained stories that has ever happened to me--it should damn well be on here.

I don't remember the exact date of this event; all I know is that I was in high school at the time, my best guess is junior or senior year (anytime between 2001-2003). I was straightening up my room--I won't say cleaning because those of you who know me, know that I [typically] don't let things get to the state at which they merit "cleaning."

So there I am, straightening things up when I glance to a small gathering of stuffed animals (saved from childhood) on the floor. Something catches my eye; something that doesn't belong...but what is it? I was going to have to go in for a closer look. Imagine my shock when I learned that the object which had caught my eye was, in fact, a black thong.

I know what you're thinking, "So what? It must have fallen out of your drawer or something." And that's where you're wrong. These panties are not mine (a phrase I never imagined needing). I wondered whether or not a friend who'd stayed the night had accidentally dropped them out of her bag...but I hadn't had anyone over in awhile.

Allow me to describe the garment for you; perhaps it's your's. You can com 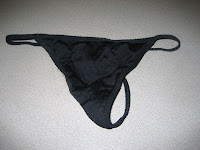 e by and pick it up if you'd like; I won't judge (much). That's right, I still have it. I plan to hang on to it until its rightful owner steps forward. I even had Amy Jo wash it, so provided you haven't gained/lost a ton of weight in 6+ years you're good to go.

It is Abercrombie & Fitch, black, size large. I'm including a photo, perhaps you'll recognize it.

A plethora of questions came upon me. And, this event is still so shrouded in mystery that not one of these questions has been answered yet:
So now you know the story of the Mystery Thong. I'm sure it will remain a mystery until the end of time. When we're all dead and gone and asking God to explain all the unsolved mysteries, you might ask about dinosaurs, Amelia Earhart and things of that nature. Not me, I'm asking, "Who came over to my house and decided to leave commando?"
- February 18, 2009