I should've known that there was no way that crazy bitch was done. Why would a crazy person actually comply with my requests to be left alone? She's like a trick birthday candle; you think you've blown it out, but then the damn thing lights up again! Does she not know that those are annoying? By the end of the day Tuesday, I'd received another message from her. I've blocked a lot of it out because it's a variety of accusations about my friend, and I won't post those.

And now I'm pissed. In the last message I sent her I said that I wasn't going to talk about this anymore. So she sent me another message. I did not reply--I'm a lot of things, but a liar is not one of them. Clearly, she's not going to stop. Thus I was forced to reply... 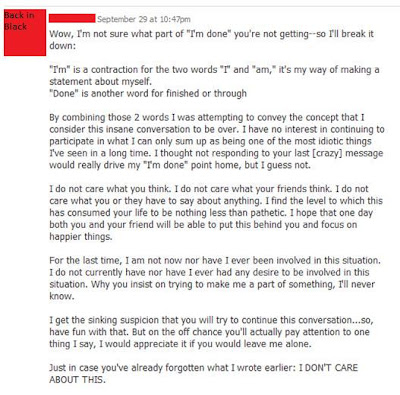 I suppose I could've been a little less of a smart ass...but where's the fun in that? At this point, I was unable to resist. I sent this message and then I blocked her. You can imagine my surprise at receiving this: 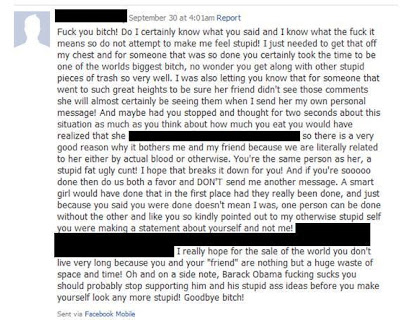 Has your mind been blown? First of all, what an opening! Did you see the part where she said I was the "world's biggest bitch"? The entire world. I'm adding that to my resume! I also like the part about I should've thought about this as much as I thought about putting food in my mouth. This is just further proof that this bitch doesn't know me--I don't eat much. I love that her defense is to call me fat--like it's going to be news to me. Like I don't tell myself that almost every second of every day. The ugly thing is another story. I am fat, and I can be a bitch, but I'm not ugly. And I should take this moment to mention that this girl is BUSTED looking. She is neither pretty nor thin. It's safe to say that I'm not stupid and I'm pretty sure I'm not a cunt (but then again, possession is nine-tenths of the law).

And then she says that I should've stopped talking to her in the beginning...wow, what have I been trying to do in every single message. She instigated this entire thing, not me. Is anyone as impressed as I was that her argument has quickly dwindled into attacks against me as opposed to a defense of her actions? I was literally visualizing her grasping at straws. Oh, did you see the part where she tells me not to attempt to make her feel stupid? It was so hard not to reply with, "Trust me, you don't need anyone's help to look stupid."

Then there's the little part where she hopes I die. Well, she hopes for the "sale" of the world that I don't live long. Let's give her the benefit of the doubt and say that she meant "sake". Unless, is the world for sale? What's the sticker price? Seriously, she hopes I die? WHAT THE FUCK!? Amy Jo was not thrilled about that part of the message. In her mind, wishing my death is not the ultimate insult--she goes on to insult my political beliefs. What's next? "I know you drive a Honda, and those suck!"

At this point I reported her to Facebook because this is harrassment. Will that be the end of this saga? Well, let's hope so.

Soooo...I do have to agree that you should probably stop supporting Obama...That's the only true thing she wrote. HAHAHAA

I wondered if you'd jump on that.