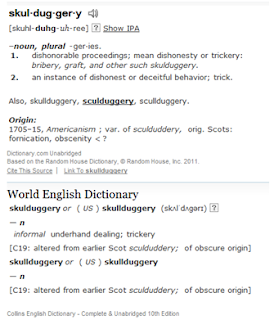 While my brother was studying for the GRE, he was learning all sorts of new vocabulary words. He mentioned that the first time he took the test the word "skullduggery" was on it. I'd never heard that word before, and neither had he. He looked it up when he got home.

I have a hard time understanding why the GRE people think that this word is important enough for potential grad school students to know. However, it's pretty obvious that the word is awesome. So I'm going to try and make it mainstream. I've already used it several times, which PS is really hard.

I don't really have anything else to say about skullduggery, I just think it's a weird word.
- January 11, 2011

Email ThisBlogThis!Share to TwitterShare to FacebookShare to Pinterest
Labels: skullduggery

I am ready to try this blog thing again: haleesays.blogspot.com.