Haven't posted in two and a half years, blah blah blah. 2015-2017 has been a whirlwind. 2016 was the worst year of my life, thus far and I feel like things are balancing out again and I'm honestly happy. More on that later, on to the story of how I walked out of the dentist's office.

Background: After my 2016 pink slip, it took awhile to find a job and I had to forego luxuries such as dental insurance. When I did get a real job I had to pick my own insurance from a list. I picked one with my dentist on it. Fastforward to my appointment in December, I drive to Lexington (oh, I live in Frankfort now) and discover that my dentist does not take that insurance so I have to leave sans cleaning. BTW, there were a minimal number of approved dentists in Frankfort on the list from my insurance. I finally got around to making an appointment with a dentist here in Frankfort and went for my first appointment yesterday at 4:30. And that's where our story begins...

I walked into the office and immediately things seemed shady. It was sort of like going to TJ Maxx or Marshall's; those stores are perfectly fine, you can get some great deals, there's never anything outright disturbing, but you know you're not at the most high-scale establishment in the biz.

I'm called back for the standard "new patient" X-rays. I then received more dental X-rays in one sitting than in all my 32 years on this earth combined. First of all, I thought I saw the girl put on gloves, then removed the mouth thing from the previous patient and then put my mouth thing on (with the same gloves). I was probably wrong about that...let's hope. Anyway, they do the standard X-ray and then maybe 20 more. I would've counted if I'd known it would be that intense.

Now I'm back out front, waiting for a room to become ready. I'm called back a few moments later. The chairs have those TVs on them; this will shock you, but despite my close relationship with television this isn't really my thing. The hygenist then asked if I'd had a "gum rating" at my previous dentist. Ummmm, not to my knowledge. She then pokes the gum area around every tooth and relays numbers to another hygenist. 2's and 3's are good, 4's and 5's are signs of gingivitis (in case you were not familiar with the gum rating process). She also announced every time my gums bled, post-poke. I will now mention that I've always had pretty good teeth; but it had been a year since my last appointment so I didn't expect things to be as good as usual.

Bad news, y'all: I had some 4's. And now we have to discuss the situation. Now I'm hearing words like "treatment plan," "home regimen" and how I'll need to return in 10-14 days until I'm all better. I get a folder with my plan...oh, and I'll need to get prescription toothpaste. And prescription mouthwash, because those are things. So I'm being polite, shaking my head and saying, "mmhmm," while thinking, "Nope. Not doing that. Or that. Prescription toothpaste? Nope. Coming back in 2 weeks? That's cute."

By this point it's about 5:15 and now it's just me, chilling in the room. Back to those little TVs. It was tuned to FXX and they just began Seth MacFarlane's 2014 cinematic tragedy: A Million Ways to Die in the West. Like most humans with at least partial brain function, I firmly believe that Seth MacFarlane should just stop. Stop everything. Cartoons, movies, hosting events, writing, speaking--stop. This "film" was never on my list of things to see. Looking at cast on IMDB makes me question the respect I had for a number of well-known celebrities. I try to change the channel, everything else is static. Turn it off? Nope. I cannot be trusted with that power. Well, how bad could it be? It's on basic cable at 5:00 p.m., after all. Allow me to now share a few of the lines I unfortunately heard (and read thanks to Closed Captioning): 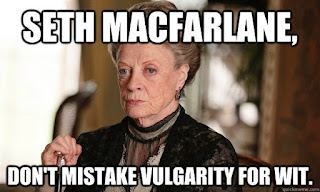 I am not now nor have I ever been what you might call "easily offended". But, come on! That's just pure trash. Actually I'd rather look at trash. If given the choice to watch that movie or sit in a dumpster for the day, I'd pick the dumpster. I turned the volume down but I could still hear it on all the other TV's in the office. What I did not hear was anyone saying, "We should turn this off." For what it's worth, I turned my little TV to static.

Now it's 5:30. No cleaning. No sight of a dentist. No hope. If this is how these people conduct business, do I really want them [literally] all up in my grill? No. No I do not. I got up, took off my little bib, and left the folder with my gingivitis home regimen instructions in the chair (darn). As I left, I stopped at the desk and said, "I have to go." The girl wanted to get the office manager so we could reschedule my appointment. I told her, I can just call for that. (Except I won't)