Say Goodbye to These

I've been an Arrested Development fan since the early days. I consider it to be one of the funniest and smartest network comedies of all time. Of course, like many quality items of substance, it was underappreciated by the masses and cruelly taken away from those of us wise enough to know that there's always money in the banana stand.

When I first heard it was being resurrected by Netflix in 2013, I was excited. But for a variety of reasons, I didn't watch it right away. I finally got around to watching season 4 a few years ago...and I did not like what I saw. And no, I'm not just talking about Lindsay Bluth's new look. It was disjointed and confusing. I had a hard time getting interested in the storyline. Instead of peppering in the running gags from the first three seasons, they just dumped as many as they could into every episode. I think I abandoned it midway through the season.

Fast forward to less than a month ago when I finally convinced my husband that he needed to watch the show. Obviously I knew he'd love it, but at a minimum I need him to understand just how hilarious it is when I say, "These are my awards, Mother. From Army. The seal is for marksmanship and the gorilla is for sand racing." 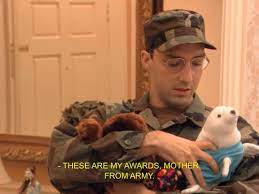 It took a few episodes for him to get on board, but he did. We finished the original run and he decided he wanted to watch the Netflix seasons. So we did. We watched the season 4 remix "Fateful Consequences" which was rearranged and re-released in 2018; and season 5 which ran in 2018-19. We finished the series finale last night...and I have thoughts. Many thoughts.

My main thought is what I said to my husband at the end of the episode: How. Dare. You.

Not him, of course. Netflix. How dare Netflix do that to my beloved show?! It's like they don't even care how long it's going to take me to mentally block out those episodes from my memory.

The original Bluths were callous and selfish, but they weren't diabolical. But under Netflix, George and Lucille Bluth became evil villains. The original Buster was an innocent Mother Boy (and he had the trophies to prove it). The new Buster was some sort of sociopath. I could keep going, but I don't feel like getting too angry tonight. I'm just glad I own seasons 1-3 on DVD, that way I don't have to stream them on Netflix and run the risk of accidentally exposing myself to seasons 4-5.

I'd like to quote Kitty Sanchez and tell seasons 4 and 5: Say goodbye to these.