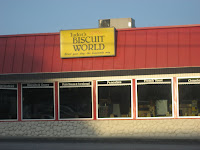 As we drove through West Virginia, we saw more and more signs for Biscuit World! It soon became clear that we were meant to eat at Biscuit World. We decided that on the way home, we would stop there. And somehow, we knew it would be amazing.

Fast forward to the end of our trip. We're driving home and we are hungry. My iPhone research of Biscuit World had taught me that the chain exists only throughout West Virginia and a few select locations in Kentucky and Ohio. It was obvious that we were going to have to wait for biscuity goodness. I began awarding everyone in the car biscuits for good behavior. We had it planned perfectly, we would hit the Biscuit World in Grayson just around dinner

time.
Before we knew it, the Grayson exit was upon us...but there was no Biscuit World listed on the sign. We freaked out. We got off at the exit anyway, Liz ran into a gas station to get the scoop. It was the longest couple of minutes in our lives.

After what seemed like an eternity, Liz came running out of the gas station giving us the thumbs up. We all screamed from excitement! When she asked the clerk if there was a Biscuit World nearby he said, "Tudor's Biscuit World?" As though there is some other Biscuit World we might be speaking of. Apparently, Biscuit World was right down the road, next to a Rite Aid. We sped down the road, eyes peeled for Rite Aid--and then I saw it! "Rite Aid!" I screamed.

We had made it. We pulled into the parking lot and that's when we discovered that Biscuit World, was closed. Apparently, Biscuit World opens at 5 in the morning; and on Sundays, they close at 2 P.M. Naturally, we did the only thing we could do: banged on the windows, tried to open the back door, took sad pictures and resigned ourselves to writing them a note. I wrote them a pretty powerful note about how excited we had been to visit their fine establishment an 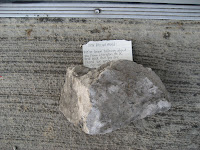 d that we knew one day we would enjoy Biscuit World biscuits. My friends then made a video of me reading the note aloud at the Biscuit World entrance. We left the note under a giant rock in front of their entrance and continued on our journey home.

The craziest part about the Biscuit World saga is that no less than 5 people have commented to me that they have either been to Biscuit World (and it is good) or that they too have seen the signs and always wanted to go some day. My friends and I plan on going sometime soon, and we hope that they have our note framed and hanging proudly on the wall. When we arrive we will tell them that we are the now famous Erin, Laurel, Liz, Amy and Katie from the Biscuit World letter and I assume they will give us free biscuits.
- May 25, 2009

Biscuit World is good....there was one in Ashland, but I think it's closed now. Just think....if you would have gotten off the Ashland exit instead of Grayson....you maybe could have made it in time. That is, if it's still open.