The Scariest Thing I've Ever Seen

Recently, I recalled an event from my freshman year of college that I had blocked from my memory (with good reason). I don't know why the story came rushing back to me, but it did. And I was slightly shocked to discover that I'd never told the tale to Amy Jo. After I told her she agreed that it merited a blog post. So here we go; I present to you: The Shower Incident.
*If you are pregnant, have a heart condition or are easily freaked out, you may not want to read The Shower Incident. May I suggest some of my more light-hearted blog postings such as Feminine Hygiene (Amy Jo's favorite) or any of the Random Things posts?*

Most freshman girls at Georgetown College live in Knight Hall (the infamous dormitory sans air conditioning); I am not one of those girls. I was the more illusive South Campus Freshman. I lived in Allen Hall, one of the non-Greek dorms on the Quad. Allen Hall was the least populated of all dorms--the entire second floor was left vacant (why I had to schlep up to the third floor is beyond me, but whatever, at least I had a nice buffer zone). Almost everyone in Allen Hall had a single room. The nice thing about a small dorm population is no waiting for the showers, fewer annoying neighbors, etc.

However, Allen was also the shadiest of girls' dorms. The lobby always smelled like a circus or petting zoo...specifically, camels (or that's what Laura and I decided). There were a variety of stories that accompanied Allen Hall and its residents. I'd also heard it referred to as "the dirty sex dorm" (but that's another story). I didn't mind these things. I liked Allen Hall. But allow me to recount one particularly intriguing morning during the spring of 2004.

I got up to get ready for my 8 A.M. class. As I made my way to the shower I heard one already running. You know how everyone has their morning routines? Well, naturally in a dorm situation your morning routine can coincide with someone else's. On these particular mornings, I always hit the showers at about the same time as another girl, Leslie (I'm pretty sure that's her name). She would almost always beat me in there and take the really good shower, leaving me to settle for the silver medal shower (which was still quite adequate).

So, I go to the bathroom and then brush my teeth (my standard routine to this day). As I'm brushing I hear the shower turn off. Sweet, she's done early! This meant I could get the really good shower and the day seemed to be off to a great start. I stand around waiting for her to emerge from the shower area. After a few minutes of loitering about the bathroom I decide to see what's going on. 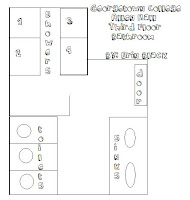 This is the part of the story where I really need to paint a vivid picture for you. First I must set the scene. Each floor had 1 bathroom, with 4 showers (ahh, a small college). It just occured to me that it would take a long time to describe the bathroom. Thanks to the Paint program (not to mention my college education) I was able to draw a diagram of the bathroom. I don't want to brag, but it's a pretty good looking diagram. I have labeled the best and second best showers as 1 and 2. I don't remember/know if the others are in the right order because I can't recall ever using them. The shower stalls were divided just like bathroom stalls, with a gap between the stall and floor so you could see someone's feet.

Now that you can picture it, back to the story. I can't wait any longer; I don't know what the hell this girl is doing but I need to get ready. I turn to face the shower area and that's when I see it.

She is curled up, in the fetal position on the floor. Her back is facing shower #2, so you can imagine what is facing me (hint: not her head). And yes, she is naked. I can't count the number of things that ran through my mind at this very second, so here are the highlights:
Mind you, I have not been quiet since I've been in the bathroom. Sounds I assume she has heard since I entered the bathroom: my shower flippy-floppys slapping around, coughing/throat clearing/yawning, peeing, toilet flushing, running water in the sink, electric toothbrush, spitting. Not to mention the fact that we're always in the bathroom at the same time; she should damn well expect me to be there! I'm standing there, absolutely in shock as to how I should proceed. And that's when she started shaking.

She wasn't violently convulsing or anything, so it wasn't a seizure. She was just sort of...shaking. I won't lie to you, I thought it was something ummm, sexual. I get it: you're single, you're lonely, you've got needs...but you've also got a private room for the love of God! But, thanks to the way she had positioned herself, I could see ALL up in her business so I soon realized that was not what was going on. Not that I'd ever even considered this as a career, but that was the moment I knew I had no desire to enter the field of gynecology.

I snap out of my shock and realize I plain ol' don't have time for this madness. I grab my shower caddy and hop into shower #2. She jumps up faster than anything I've ever witnessed! She was up and out of that bathroom in a flash! That was another clue that she had complete control over herself.

Somehow, I manage to go about my business and put this situation out of my mind for the remainder of the morning. Honestly, I don't think I could've verbalized it at that point even if I had wanted to. Fast forward to lunch time. It's noonish and I'm in my usual noon-time locale, The Caf. I've finished eating and am walking back to a table full of sorority sisters after taking my trash, plate, etc. up to the Hole (yes, that's what we called the place where you took your dirty dishes). And who should be walking into the Caf at this moment? You guessed it, Leslie.

Suddenly, the entire event comes rushing back to me. Naturally, I took one look at her, screamed and ran across the Caf to get away. I desperately needed closure...after weeks of pondering what happened that morning, I told my RA. I feigned concern over Leslie's health and well-being and told the story as though I just wanted to make sure she was OK. I already had that answer, Leslie was anything but OK! I needed to know precisely what was wrong with her.

Unfortunately, I was never able to find out. To this day, I don't know why she did what she did. I have a list of questions I plan on asking God when I get to Heaven. What's the real scoop on the dinosaurs? Whatever happened to Amelia Earhart? And what, what was that girl doing in the shower? And that is the scariest thing I've ever seen in my 24 years.
- May 31, 2009

So glad I didn't ever have to deal with that...