What's the Chinese word for Interesante?

Something very interesante happened to me the other day. I was checking my recent posts to see if I had any comments on anything I've written. It doesn't happen a lot, because you apparently have to set up an account and it's a bit of a pain. Usually people just tell me in person or write it on Facebook or something. Which I'll admit, sucks a little bit because I like to see the comments on the blog. It's proof that people are reading it. And I loves me some proof.

Anyway, I was checking out my posts and saw that I did have one comment. I figured it was someone telling me, "Finally, you're writing again because you've been a really shitty blogger as of late," or something to that effect. But no. I saw this: 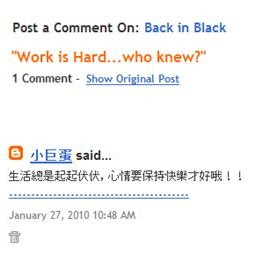 Naturally, I had no idea what it said. So I clicked on the person's name, which took me to their profile. Of course, it is also completely Chinese so it was of no help. Knowing what this said became of utmost importance to me. What if it was something mean or stupid? That is my theory on Asian character tattoos--they just tell us it says "peace" but really it says, "moron" or something. I'm ashamed to say that the following realization took me several days, but here it is: my brother knows an inordinate number of Asians. It's a bit of an ongoing joke, being as almost all the girls he has dated have been Asian. All in good fun of course, because they have all been lovely girls. I also remembered a Facebook post in which he mentioned not getting any sleep, so I sent him this message:

So apparently, you aren't sleeping. Do me a favor. Check out the comment that was on my blog post...and I clearly can't read it. Please access your many Asian resources to decipher it.

And he responded (at 4:26 AM). I wasn't sure whether or not the message was Chinese, Japanese or what. Apparently, it's Chinese, because his girlfriend (from China) decoded the comment. It says, "Life is full of ups and downs but you have to keep your head up." What a lovely anonymous Chinese note!
I still wonder how this person stumbled across my blog. I want to know about them (and any subsequent fans around the world). So, to that person I say, whatever the Chinese phrase for "Thanks and welcome to my blog," is.
- February 06, 2010