What is it with Me and Coffee Times?

If you remember my post "And in this Corner, Creepy McCreeperson" from 2009, you know that sometimes I meet strange people [albeit against my will] at Coffee Times. Well, I did it again...although we didn't actually meet. 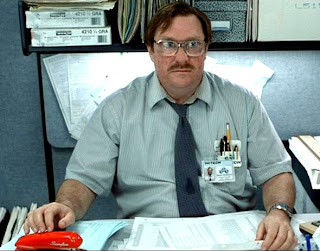 As usual, Kristin and I were meeting at Coffee Times to catch up on life. I was there to give her a birthday present and tell her all about my recent trip to Argentina. All of our favorite, more secluded seats were taken so we had to sit up front, right by the aisle to go up to the counter and order. There was a guy sitting at the table next to us, working on a laptop. To fully appreciate the story, you need to know what he was wearing. He kind of looked like Milton from Office Space, but thinner. He wasn't skinny, but he wasn't fat. He was probably in his 40s. Sadly, I forget what kind of shoes he was wearing...probably flip flops. He had on shorts (despite the fact that it was about 50 degrees and raining outside) and a black tank top with something about a Lexington Pride Parade written in rainbow letters. He also had relatively thick glasses and a moustache.

We sat down at our small table; he and Kristin were seated back to back, which meant I could look over his shoulder and see what he was doing on his laptop. He also had headphones in, so I probably could've talked about him if I wanted to--but I didn't. For the first part of our conversation, he was watching random YouTube videos. Most of these videos featured drag queens dressed as Lady Gaga, covering Lady Gaga songs. Fine, whatever. I'm not here to judge. Regardless, it was hard to focus on my conversation with Kristin. Little did I know, it was about to get harder.

The next thing I knew, he was on some website called "The Bear Den" or something like that. The tagline of the website boasted that this was the social network for bears. I had already surmised that this guy was gay based on his tank top. I don't remotely care if you're gay, straight, bi or whatever else there is. So now I knew that this gentleman preferred "bears" or large, hairy gay men. While that is a little TMI, it wasn't anything to get me upset. I did find it odd because he wasn't particulary hairy himself. I think I did type a message to Kristin on my phone that I was going to have to tell her about this guy because I was surprised that he seemed to be looking up some rather personal things in a public place.

We start talking again, and naturally my eyes wandered over Kristin's shoulder to see what he was up to now. He was still on the bear site. But now, there were all these little image files that he was clicking on. "Probably profiles of other bears," I thought. He clicked on one and I strained my eyes, because now I was intrigued. Well, it wasn't a face in that image. My eyes strained more. "Wait a minute," I thought, "is that? Noooo. It couldn't be. In the middle of Coffee Times? He wouldn't--oh, apparently he would." That's right. This man was looking at pictures of penises in the middle of the coffee shop.

The Bear Den (or whatever it was called) must also be used for dating. I suppose people want to see what they're getting into before setting up a date, so it appears to be common practice for the men on this site to take pictures of "themselves". Click after click was another random dude holding his dick. I rarely write poetry, but I think that one is pretty good.

I know my eyes got huge because Kristin starts mouthing, "what is he looking at now?" and I just start shaking my head. It just didn't seem right to me--I mean, that's not what free WiFi is for. It's not that I'm a prude, but Coffee Times is a nice place. People bring kids in there all the time. Not to mention, every person who would walk up to the counter could see the screen of his laptop. I decided to say something, luckily, my friend (also named Kristin) was working at the time. Ironically, she was there when we met the cage fighter as well. "Ummm, I don't know what your policy on this is..." I began. The first thing she said was, "What is it with you guys meeting weirdos in this place?!" She told her boss who eventually went and told the man to shut it down.

Kristin and I didn't return to our table. I was a little afraid that he would get mad and try to say it was just because he was gay. It wasn't. I would've said something whether it was a man or a woman looking at gay/straight/whatever images.

What's strange is that Coffee Times is not a shady place. It's in the middle of suburbia and it's not even like they do open mic nights or something that attract all the weirdos and hipster posers. It's just a nice, neighborhood coffee shop. I've never heard of anyone else having these issues there. I guess I'm just special.
- May 29, 2011