And in this Corner, Creepy McCreeperson 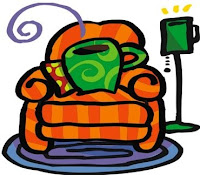 While I enjoy a variety of haunts in Lexington, one of my favorites is Coffee Times. My friend Kristin and I go there frequently. We've both been so busy lately that we planned a special Coffee Times session in order to catch up. Little did we know that our April 4th trip to Coffee Times would include almost no catch up time and would scar us for life.

We placed our orders, sat down, and began chatting. Her phone rang; it was her fiancée. She answered and told him that she would call him back. They'd just gotten engaged the night before, so she told him that several people had said congratulations. She hung up and just as we were about to resume our conversation, we heard a voice.

"I'm sorry, I didn't mean to eavesdrop on your conversation," he said, "but I heard you say that you got engaged, congratulations." This seemed nice (albeit creepy) so she thanked him and again we turned to resume our conversation.

The next thing we know, he's dragging a chair over and says, "I'm just going to join you." Now, I had been at Keeneland and I was a little drunk; however, I was far from the level of drunk at which you are friends with everyone so I know I didn't invite him over. But there was not stopping him. It wasn't, "Mind if I join you?" It was, "I'm going to join you," and the subtext was "whether you like it or not."

He then launches into this diatribe about how he is the last person to be giving out relationship advice (as though Kristin had asked him for advice regarding her upcoming nuptials). He told us about the hoards of failed relationships he'd been a part of. He told us how long it had been since he'd last had sex (2 years, 3 months, 18 days). You know, typical things you share with complete strangers. 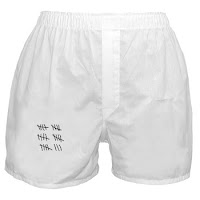 I get it, he's hard up. But if he keeps sharing the running count with strangers (or anyone for that matter) he'd better be prepared to keep counting. Have you ever heard the saying, "if you want a sure-fire way to get laid, just nonchalantly mention how long since you last got any"? That's right, you haven't, because that's not a real saying. It's not a real saying because there is absolutely no truth to it.

Normal people would reach a point at which they would stop counting. Not this guy. Even if you do make another tally mark on your Days of Horniness calendar each night, at least pretend like you don't know the number. If you insist on telling people how long since you last had sex, here are a few options:
He also mentioned that he is an amateur cage fighter. I want you to take a few minutes to let that sin 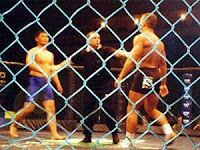 I should mention that I have a friend who works at Coffee Times, and the entire time we were cornered by Creepy McCreeperson she and her co-worker were just staring at us with these "what the hell is going on?" expressions on their faces. And all I could do was stare back and try to send telepathic SOS messages. That's when Kristin said that she had to go to the bathroom.

I looked at her with a pained expression, as if to say, "you are not leaving me alone with this weirdo." I would've rather she had peed in an empty coffee mug right there at the table than leave me alone with him. But somehow, I don't think that would've scared him off. I assumed that she had reached a point at which she could no longer hold it (and she had). We were both sensing a vibe that he wanted to ask me for my number. What can I say? I attract winners.

Thankfully, he didn't ask me for my number and when Kristin came out of the bathroom she said, "Well, I should get going." I quickly added, "I have to go, too!" And we literally ran out of Coffee Times, afraid that we may never be able to return. Afraid to stand and discuss the situation in the parking lot, we got in our respective cars and quickly called one another for an in depth conversation.

The next day, I was still sad that I hadn't gotten a chance to peruse the shop at Coffee Times or Street Scene (the cool vintage store next door). I decided to chance it; I returned to the scene of the crime. I went into Street Scene first, looked around and then peered through the door which adjoins the two businesses. No sign of him; I ventured in. One of the girls who works there asked if she could help me with anything. I said that I was just looking around, that's when she saw my face. "You were in here yesterday," she gasped, "and that guy was talking to you!" I preceded to then fill her in on the whole situation (his cage fighting, his dry spell) and she mentioned that after Kristin and I left, he stayed there for a long time and just stared at them while they worked. I suggested that Coffee Times may need to get some bouncers, and she agreed.