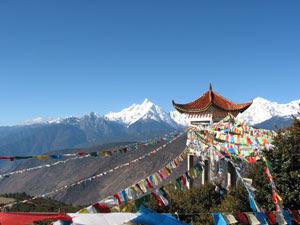 I've decided to go to China this summer! There's a mission trip to teach English to middle and high school students in a city called Shangri-La in July and I signed up. The trip is from July 10-30. I just signed up fairly recently and it's been a bit of a whirlwind ever since. I've been working on writing my sponsor letter in order to raise money since the trip costs $3,500. I've created a Facebook event to try and advertise about the trip as well.

Shangri-La is in the Yunnan Province of southwest China. It's a fairly small city, inhabited by mostly Tibetan people. The city is up in the mountains; the city itself is something like 10,000 ft. above sea-level but the mountains around it are as high as 16,000 ft. sea-level. And it hasn't always been called Shangri-La; the name of the city was changed in 2001 to promote tourism in the area.