Guess Who's Back? Me...and My Anxiety

It's been a long time (I know shouldn't left you, left you, without a dope beat to step to, step to). Almost three years, as a matter of fact. Here we are again. How many times have I stumbled back to this blog after taking an extended break? I'm nothing if not a prodigal blogger. I'm almost certain I have referred to myself that way in previous posts...I suppose there's something to be said for consistency.

About 10 days ago, I found myself having a good, old-fashioned panic attack. As my husband helped me get through it, I began describing what it feels like to have issues with anxiety. He suggested I write it down. Later that night, I opened up a note on my phone and started writing. It felt really nice to get my thoughts out. So nice, in fact, that I decided I would start blogging again once my new computer arrived. 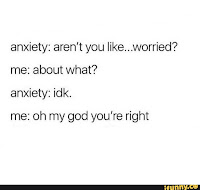 Anxiety is like a betrayal. You spend all this time treating your body right, taking care of it. You exercise, eat right, maintain an intense hypervigilance regarding everything you can think of so that you're prepared for whatever life decides to throw your way and what's your reward? Your mind and body combine powers (Captain Planet style) to launch a surprise attack of cruelly absurd mind games and concerning physical symptoms. Next thing you know, you can't watch TV or read a book because you're spiraling down the rabbit hole of worst case scenarios. Not to be outdone, your body then shows up and says something to the effect of, "I'll see your runaway thoughts and raise you nausea and chest tightness." Well played, anxiety. Well played.

I realize this first entry wasn't particularly funny or charming, but I have to shake off the dust somehow. I promise to be more entertaining next time. Plus, who even reads these things anymore? I suppose to keep up with the times this entire post should have been an Instagram caption accompanying an artistic photo of a coffee mug or whatever. Or I should be reading this aloud in my best NPR voice as nature photos with a filter that makes everything have a yellowy glow pass before your eyes on Tik Tok. Too late for that. I've already written everything here, not to mention gone to the trouble of adding an amusing image and YouTube link to a classic 2000 R&B jam.