I'm somewhat of a sucker for a British television show. Just give me a slightly rainy climate, people talking about puddings, and a pub with the word "cock" somehow in its name (but no one giggles about it because they're infinitely more mature than we are) and I'm in. 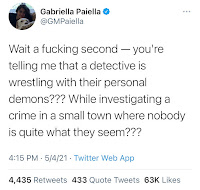 I really enjoy this British procedural called Midsomer Murder. It's been on for approximately 4,000 years. There's something about it that soothes me. You can almost always count on a POV camera shot of a crime being committed. There you are, a killer, moving about through a fictitious English village when you come upon your victim. Inevitably, they turn towards you and say something like, "Oh, it's you" or "What are you doing here?...what's that in your hand? Ah!!! AHHH!!" And that's it. They're dead.

Here's a life-saving tip for you: avoid ambiguous greetings at all costs. Somebody sneaks up on you, by god you say their name. Full name. Loudly. "Oh! It's you, Sam Jones! I didn't expect to see you here, and carrying your hunting rifle no less." See, now you've ruined the mystery and narrowly escaped being murdered. You're welcome.

Another hot tip for you: Keep your ears peeled for a theremin. One of my favorite things about Midsomer is that they aren't afraid to use the theremin, the creepiest sounding instrument known to man. Theremin music never indicates a positive plot twist. If you hear a theremin, you get the hell out. I will admit it adds a layer of gravitas to the show's theme song.

One of my other favorite things about Midsomer is that the wife of the chief inspector is almost always a witness to a crime or loosely connected to the victim in some way. This bitch has found a lot of bodies. She's in every club and society in the village. Joining the local watercolor society, doing grave rubbings at a church where the local bell ringers are preparing for competition, appearing as an extra in a period piece being shot nearby? By god, Joyce Barnaby is there. [Those are all real scenarios from the show, BTW].

What I don't understand is why people don't stay the hell away from her? Chief Inspector Barnaby is on the show from 1997 to 2011. That's 14 years of this woman having at least some tangential connection to dozens of crime scenes. So, if I'm a resident of Midsomer county, and I see Joyce show up, I'm gone. "Oh it's sure nice to be helping out the village restore this old stone bridge. I can't wait to see it all cleaned up again...oh, is that...Joyce Barnaby? You know what, I just remembered that I have to clean the loo...in my flat...before the big, uh, Guy Fawkes celebration. See ya!"

I've begun re-watching the show from the beginning courtesy of Amazon Prime. It's oddly soothing. As I type, there's an episode on in the background and I literally just heard the phrase, "Oh, it's you." My night has been made.