Like most suburban white girls, I am a connoisseur of rap music. That almost always surprises people. I guess they assume that I hear the songs at clubs and dance to them, but they never expect me to know all the words. You can chalk that up to my uncanny ability of rapid memorization, but I am a bit of a P-I-M-P. 9 times out of 10, if I'm spelling something that ends in the letter o, I say "to the izzo" merely out of habit (not to mention a shout out to H.O.V.A). 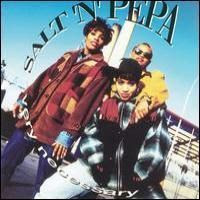 Yesterday I was in my car, surfing the XM Nation for music. Thanks to the "Nineties on 9" channel, I was able to catch Salt-N-Pepa's Whatta Man. So yea, it was a pretty good day.

There I was, rocking out [as always] when some of the lyrics struck me as odd. At the end of the first verse there's a laugh and then they say, "You so crazy, I think I wanna have your baby."
Wow, topping the charts of "Things You Never Say to a Guy," we have Salt-N-Pepa with Whatta Man.

While we're on the subject of Salt-N-Pepa, let's talk about the unsung hero of that group: The DJ, Spinderella. Sure, she gets that shout out at the beginning of Let's Talk About Sex ("Spinderella cut it up one time"), but why isn't her name a part of the group? It doesn't really go with Salt-N-Pepa, but maybe they should've come up with a different name so that everyone could be recognized.

It's the same as Daughtry, Van Halen, Dave Matthews Band, etc. Those are bands, not solo acts. If someone came up to me and said, "Hey, do you want to be in my band that's named after me and only me?" I'd be inclined to pull a Sarah Palin and say, "Thanks, but no thanks." But I'd eventually reconsider because I'd be in a band and that would be awesome. I guess it is handy for those groups if someone quits because they've lost creative control or have to go to jail or rehab; provided it wasn't the front man, then there's no need to rename the group. What if Destiny's Child had been some combination of all of their names? They'd have more name changes than Prince. I bring that up only because I'm listening to Say My Name right now, recorded back when Destiny's Child had 4 members (and was still together). 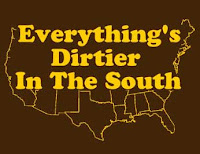 Mid-way through writing this post I thought about including a list of my must-have rap songs but I'm afraid it would be really long as it would be too hard to whittle the list down. I'd imagine it would be like choosing a favorite child. There are some artists I enjoy so much that I couldn't reduce them to just one or 2 songs! I doubt I could list all the artists because even that li

st would be too long! Virtually any and every Ludacris song would be on there; after all, we both represent for the Dirty South. There'd be a significant amount of Kanye West as his songs are usually really smart and clever--definitely The New Workout Plan (off his first CD, The College Dropout)! I'd also throw in some Reggaeton, which is basically Spanish/Latino rap.

Obviously I could ramble on about rap for quite some time. So I'm going to leave you with the reminder that "stuntin' is a habit."
- September 21, 2008

No, it most certainly is not! But, some would argue that it is necessary.