I'm Not a Player I Just Crush A Lot...or not 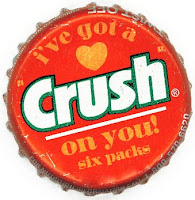 2008 has been the year of the crush for me. I have had like, 2. That might not sound like a big deal to some, but it is rare for me to have even one so 2 is practically unprecedented! Don't get me wrong, I think plenty of guys are cute but the tendency to fixate on any one particular guy isn't generally my style (which is odd, given my ease of addiction).

On those rare (or this year, not so rare) occasions that I find myself with a crush I am reminded of how nice it is to not have one. Frankly it's irritating and it throws off my whole thought process. There I am, just thinking about something super important and who decides to bust all up in my brain? Old whatshisname.
Take today for example: I was walking around the mall wondering whether or not the women in maternity clothing ads are actually pregnant or if it's one of those fake stomachs like in the movies. *And yes, in my book this does qualify as "something super important."* Clearly, this is an issue that one could devote a significant amount of time to. Actually, cancel that. You can't devote any time to it at all, because now you're thinking about some guy.
And what's worse is that it's not like he's doing anything entertaining. It would be a whole different story if he showed up and did a funny dance or told some jokes or something. But he doesn't; he just hangs out. So on top of being distracted, you're bored. He's like that Microsoft Word Paper Clip, loitering inside your brain. But even the Paper Clip does little tricks.

Perhaps I'm the only one with the kind of time to sit around and wait for the Paper Clip to make a move, so take my word for it, he does! I just opened up a document to watch the Paper Clip and list off some of his amusing tricks, but he wasn't there! Naturally, I opened up the help section and did a search for "paper clip." As it turns out, as a part of the Microsoft re-design, the assistant was eliminated! Damn you, Vista! Why must you ruin everything good in life? I think that I feel about Vista, the way Michael Scott feels about Toby. In my search for a photo of Clippy, I have discovered that he was hated by many people. Probably busy people. People with real, live human office assistants. People with more important things to do than be amused by a cartoon office supply. I can't decide whether

I'm sad for them or sad for me. Hmmm, I'll go with them. My ability to be amused by the smallest things will always amuse me (shocking). See, these are the super awesome thoughts I'm talking about! I could think about this for hours...if crushes would stop interrupting me.
This had better be happening to guys, too. I mean, if I start surveying guys about this issue and find out otherwise I am going to be super pissed. Well, I'll be super pissed for a short window of time until I am then distracted against my will.
- December 17, 2008