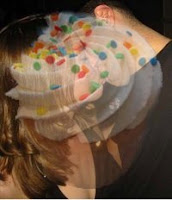 Like most normal, red-blooded Americans, I belong to a small variety of Facebook groups. 99.7% of all Facebook groups do absolutely nothing, serve no purpose and simply appear on your profile page providing just one more manner in which people can stalk you. Nine times out of ten, I join the group based on its name. For example, when I saw the group "I Like Cupcakes and Making Out," I knew I had to be a part of that. I'm sure some people prefer not to make such bold statements on Facebook, but I think that both cupcakes and making out are fantastic, and I don't care who knows it. Plus, just check out their picture--a translucent cupcake (or cupcake ghost, if you will) floating precariously close to a make-out session. Fantastic...not to mention the fact that it reminds me of the intro to a story my friend once told me. "This is a story about cupcakes," she said, "and sex." There's no way you're not immediately interested in that story! The gist of it was that one day she got a real hankering for cupcakes, so she made some and they were great. Later that day, she had sex (whether or not she had sex due to a real hankering, I'm not sure) and after it was over she couldn't help but think about how much better the cupcake was than the sex. I'm still unclear as to whether or not those were the best cupcakes in the world or just bad sex...maybe both. She does make a mean cupcake, though.

Another one of my favorite Facebook group titles is "My Friends are Getting Married. I'm Just Getting Drunk." If the name isn't enticing enough for you, allow me to provide the group description:

So you heard about another friend tying the knot? Starting to think it'll never be you? Really excited about that?

Fret not, it's not a future of 10,000 cats and Golden Girls cheesecake binges solo. They might be walking down the aisle, but you're walking to the bar. I think we can all agree the latter is more our style anyways.

I was at a wedding last weekend and will be at (and in) another wedding this coming weekend. I typically don't go to many weddings, so two in a row is big for me. Everyone around me seems to be making some sort of progress in their life. My friends are getting engaged, married and having babies...while my accomplishments include: reigning iPhone skee-ball champion (a title I invented).

Although I have no intention of owning a small army of cats and don't like cheesecake, I still enjoy walking to the bar. Am I the only one who begins to second-guess their RSVP when they discover the reception has no bar? Don't get me wrong, I still go to the wedding; but I'd be lying if I said there isn't a brief moment at which I debate the tackiness of bringing my own flask to a reception. I'm not demanding an open bar (although that would be awesome); I'm quite alright with a cash bar.

Alcohol plays an integral part in the array of emotions I experience at weddings. Much like a traditional roller coaster, my wedding emotions always start and end at the same place: happy and excited. But in between the happiness and excitement is sadness, jealousy, ambivalence, apathy, bitterness, anxiety and some form of inebriation (usually slightly buzzed or tipsy, full blown drunkenness has yet to make an appearance but never say never).

So I'm at this wedding, enjoying a $6 rum and Coke when I came up with what I think is a fantastic wedding tradition just waiting to be started. The bride and groom were having their first 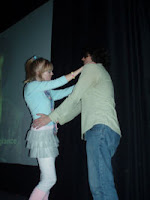 dance together, and for whatever reason I started thinking about 7th Grade Dancing.
If you're unfamiliar with 7th Grade Dancing, allow me to elaborate. Remember how you used to slow dance in 7th grade? Fully-extended arms, leaving approximately 2 feet between partners (more than enough room for Jesus, if you went to a Christian school), slightly swaying back and forth. Please examine this picture courtesy of a WikiHow article entitled "How to Dance at a Middle School Dance." Now, for those of you who want to kick it up a notch: dancing should occur within a close proximity to your friends. This way, you and your dance partner don't even have to look at each other, you can just talk to your friend for the entire slow jam. I think that after the bride and groom have their first dance, they should have their first 7th Grade Dance together. It would be particularly awesome if the song they danced to was some sort of killer monster ballad from their junior high years. I think it would be a nice, awkward memory for the couple to make together.
- April 21, 2009