I Spy with My Little Eye... 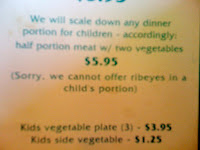 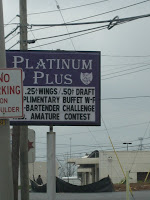 ce on your menu? I'm betting a lot.
This next thing is my favorite...I was driving out to Bryan Station high school to do my observations for class and I passed by the Platinum Plus strip club. I had to stop at the red light in front of the club so I decided to read their marquis board. There was a lot to take in on this particular board. First of all, $0.25 for wings and $0.50 for draft beer seems like a pretty good deal. Secondly, I am beyond creeped out by anyone who partakes in the complimentary buffet at strip clubs. And finally, how are you going to work for a strip club and not know how to spell amateur? Amateur Night is a pretty regular occurrence at strip clubs. There have to be signs up...how does the proper spelling not just seep in, subliminally?
Here's the really odd part: the other side of the marquis contains exactly the same message, only amateur is spelled properly. Did the same person not do both sides of the board? It's not as though they ran out of letters and were forced to improvise; all the letters are there, just in the wrong order. 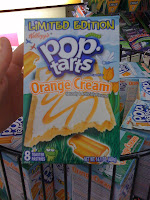 The final thing could be ridiculous, or it could be super awesome...I won't know until I try. I was helping my friend find some Easter candy at Kroger (by helping I mean I drover her there and stood there while she looked at stuff) when I saw an interesting creation on display. Could it be possible that two of my favorite things have come together in a clash of awesomeness like I've never seen? Poptarts and Creamsicles, together at last! I'm a little bit afraid to try it because I don't want to be disappointed. It's not like Poptarts are cheap. I'd hate to waste money on a box of Poptarts that suck. I'm probably putting more thought into this decision than I put into most things. For example, the decision to go to graduate school was easy. Graduate school? Meh, OK sure. But Poptarts? Do I have to decide now?
- April 16, 2009