Am I the only one who judges the inhabitants of the cars around me? Of course I'm not. For example, when I'm driving next to a car that's all beat up and obviously been through a few wrecks, I get away from that person because they just don't care anymore. I also have a bumper sticker obsession. I'm not the type to EVER put a bumper sticker on my car--unless I had an old POS-mobile. I'm more of a static cling kind of gal; bumper stickers are so permanent and they decrease the resale value. This might sound odd coming from someone with a tattoo (and dreams of another tattoo should massive anxiety subside), but it's not like I'm planning on selling my body any time soon (or ever).

But when I see a car with bumper stickers, I have to know what they say. I love clever things. One of the worst days of my life as a child (other than the turmoil of my parents' divorce, etc.) was after an appointment at the eye doctor. My eyes had been dilated and I was rocking those awesome old lady sunglasses when we pulled up behind a bumper sticker-clad car. Although my vision was blurry, I could tell that everything but the back window of this car was COVERED in bumper stickers. However, I couldn't read them. And to top it all off, it must have been rush hour because we sat behind that car for a long time. Had my vision been unaltered, I would've had ample time to read the witty repartee of the bumper stickers. That's just as bad as being caught behind a similar car for a short period of time.

A few weeks ago, I was driving to Richmond, and I was behind a minivan delivering Papa John's. There was a bumper sticker I couldn't read so I sped up. And thank God I did, otherwise I wouldn't have known how this person felt about "titties & beer," I assume he's pro on both of those hot-button issues. I began wondering whether or not a middle aged man, delivering pizza in a mini-van with a titties & beer bumper sticker could pinpoint exactly when his life took a different turn. I'm betting yes. 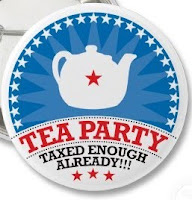 Of course my current favorite bumper stickers have to be for the oh-so-intelligent "Tea Partiers" (Amy Jo's favorite insult). They're so moronically clever. Clever in that they are a tad witty, but moronic considering that the majority of those people have NO idea what they're talking about. On my way home this past Monday night, I was behind one such car. The bumper sticker that I could read from a distance was the standard Tea Party sticker. TEA has been turned into the monogram "Taxed Enough Already" and then there's a little teapot that says "We're TEA'd off." Chuckle. They also had a Jeff Gordon license plate frame...am I insinuating that Nascar fans are all Tea Partiers? No. But, you have to admit, there is a correlation. 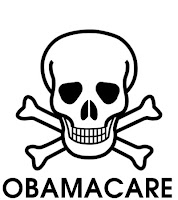 Now, it was dark out, making it difficult to read the other bumper stickers at the top of the rear window of this car. Naturally I switched lanes and continued to follow them. Jackpot: Red Light! I got to read the stickers in all their glory. In the left corner, we had the Skull & Crossbones with the message "Obama Care" (because as we all know, we're going to have death camps now that universal healthcare has been approved). And in the right corner, Stop Obama's Socialism (spelling out SOS). I'm pretty sure this car was powered by ignorance. If you're too stupid to understand the actual definition of socialism and how it's different than capitalism and that America will never be anything other than a capitalist nation, I have serious issues with you operating heavy machinery.

I will point out that at the bottom of this ad I found for the SOS sticker, it says, "Every $25 donation gets a free bumper sticker." For a group of people so concerned about getting their money taken away by the powers that be, they sure are ready to throw away a good chunk of change on a bumper sticker. $25 bumper sticker, good choice. 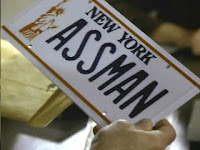 Conversely, I am not a huge fan of vanity plates. Most of the time, vanity plates have to be so immensely abbreviated that I have no idea what the person is trying to say. Once, on the way to Hilton Head (blech--my hatred for Hilton Head will be explained at a later date) I was stuck behind a car with a vanity plate I couldn't understand. Traffic inched along as I spent hours behind this plate, trying to figure out what it meant--no such luck. I was stumped. If memory serves me, I think I later realized that Ohio license plates are laid out differently than Kentucky's. Rather than having the numbers and letters divided into two 3 character groups, Ohio just throws 'em all together. So the vanity plate I was attempting to decipher was merely a standard issue nonsensical license plate.

I totally have seen the guy with the DRUNK plate. I asked several of my friends if they would pull him over...