If You Can Find a Faker Pork Sandwich, I'd Like to Hear It

Amy Jo and I were on our way to dinner the other night, listening to NPR. We heard a story about the McRib Sandwich, quite possibly McDonald's most questionable menu item. Basically, the McRib is not a standard menu item--despite the numerous Facebook groups in favor of the possibility of a year-round McRib. The McRib will once again be available starting November 2, 2010. So we're listening to this story, all the while wondering how people could want to eat this sandwich, when I begin telling Amy Jo about how they spoofed the McRib on The Simpsons (of course) in an episode called I'm Spelling as Fast as I Can (season 14). 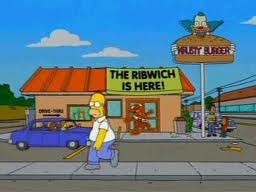 Krusty Burger gets a sandwich called the Ribwich and, naturally, Homer loves it. Sadly, like its real world counterpart, the Ribwich is available for a limited time only. Homer hooks up with some people who follow the Ribwich around the country, just so they can eat it. Also, Lisa is in a spelling bee.

Almost immediately after I finished summarizing the episode for Amy Jo, NPR did the same thing. They even had a sound byte. So the first observation is that I could work for NPR. I wouldn't interview people, I'd just reference popular culture.

The really interesting thing we learned from this report was that there is a website called McRib Locator. One day, a meteorologist realized he could apply the same principles he uses to track the weather in tracking the McRib sandwich across this great nation of ours. Also, he has driven 10 hours just to get a McRib.

Now, I don't like the McRib (although I've never tried one--it just doesn't seem like something I'd be interested in), but I was oddly excited to hear about this website. I guess it just makes me happy when people devote portions of their lives to oddities.
- October 19, 2010

Email ThisBlogThis!Share to TwitterShare to FacebookShare to Pinterest
Labels: mcdonald's, McRib, The Simpsons

I hear there is now an opening at NPR...I'm sure you could get the job. :)