It's 7: 32 a.m. and Lola and I have been up for an hour now. What a fantastic way to start your Saturday...am I right? Not to mention that Lola is now asleep at my feet. At least it's finally starting to get light outside, now I don't have to be so scared. Why am I scared? Well, the most recent episode of CSI scared the bejesus out of me.

I started watching CSI in high school, when my friend LeighAnn told me about a specific episode (I now know it to be titled, Cats in the Cradle). This episode features an old lady found murdered in her home full of cats. Long story short, the little girl across the street is responsible for the murder. The old lady wouldn't give them one of her cats so this little kid stabs her with a pen. And then her sister rats her out and the guilty girl says, "Tattletales go to hell." That's messed up. Just messed up enough to be awesome.

Sadly, CSI and I had to take a break. When my dad first moved to Indiana, he kept his house here in Kentucky. I lived at that house alone. I had to stop watching a lot of my favorite shows: CSI, Law & Order SVU, etc. I couldn't even watch reruns or DVDs I owned. You see, sometimes my imagination can get the better of me...for example if I'm watching a crime show and they don't catch the killer by the end of the episode, then he's probably outside in my backyard. If you ask me, that makes perfect sense. I couldn't even watch certain previews for scary movies. I'm pretty sure I've previously written about the preview for The Others haunting my dreams; I tried to find the post to put a link in, but I can't.

Now that I'm living with Amy Jo again, CSI is back in my life. Our Thursday nights are pretty jam-packed with TV shows (Big Bang Theory, Community, 30 Rock, CSI, Parks and Rec, Jersey Shore, The Office*). The Office has an astrik because at this point we could take it or leave it--seriously, when was the last time that show was as funny as it used to be? If you're aware of the air-times and networks for these shows, you see that we can't watch all of them when they originally air. So we DVR them. Our problem this year (after adding CSI back into the line-up) is that the DVR can't record all these things and let us watch something at the same time. Side bar: I feel like I'm singing my own verse in the classic song, White People Problems. Sometimes we have been known to change our viewing location throughout the night--using different TVs at different time so as to not disturb the DVR; but that gets tiring. Mostly we just wait and watch everything at our convenience, sans commercials. Last night we got caught up on this week's programming, including CSI.

Holy crap. This may be the most frightening CSI I've ever seen. I mean, the one with the doctor performing sex change operations in a storage unit was unsettling, but I'm legit terrified of this bad guy. Just look at this image from the episode: 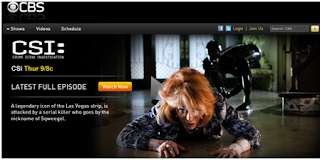 The killer wears an all black latex suit and creeps hard core on these people--he lives in their house and spies on them and then he attacks them, but doesn't kill them the first time. You see, they're all well-known (and liked) people in the community. But apparently they all have secrets so he wants them to confess or he kills them. I don't care who you are, that's scary. Oh, and did I mention that he appears to be an out-of-work Cirque du Soleil (PS, I spelled that right on the first try) performer because he squishes into these small spaces and walks around all creepy and bendy?! CREEPY! Apparently, his name is Sqweegel--also creepy. And of course, he's a serial killer so they aren't going to catch him in 1 episode. They have to drag it out and make it more interesting. Apparently this killer is from an online novel written by Anthony Zuiker (CSI executive producer). I kind of want to read these books, but Amy Jo is going out of town on business soon and I can't risk opening that can of worms.

I mean, deep down I know that Sqweegel is not going to get me because:
I know all these things and yet, I keep looking behind my shoulder for a creep in a latex suit.
- October 16, 2010