Here's some fair warning: this post may be slightly controversial and thought-provoking. I suspect it will be the topic of discussion at water coolers across the nation soon.

I can't remember if I've blogged about babies before. Lots of people I know are getting engaged or married and having babies (not necessarily in that order). It's weird. I mostly like babies. Sometimes they suck, but everything sucks a little at times. I'm in favor of having my own baby or babies at some point in my life. That being said...why is it that when people have babies they become condescending and believe they have reached this level of intelligence that you can only attain through childbirth? *I should probably take this point to mention that I am not talking about anyone I know; I'm merely speaking in generalities.

I hate to break it to those people, but making and having a baby is not hard. Please note, I did not say that raising a child isn't hard--because I'm betting it totally is. But people develop this condescention shortly after having a baby, as though the hardest part is behind them. At that point, all they've done is have sex, be given an excuse to pack on some pounds and get the baby out. Now, I am not remotely interested in that last part. I have a very strong feeling that childbirth is not something I can handle, but that's another post for another day. The actual point of this post is to compare infants and puppies. 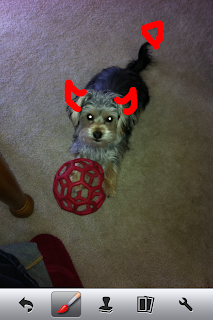 I'm currently in the process of getting sick (what's new) and I am sleep deprived which always guarantees illness for me. Why am I sleep deprived? Lola (I've highlighted her horns and forked tail because her cuteness usually renders them invisible). I love this dog, but at times I think she might be trying to kill me. Although I do not have a baby, I am a new parent. A puppy parent. And I'm here to tell you that being a puppy parent is just as hard as being an actual parent. I'm sure you're thinking, you can't compare the two because you don't have a baby. Amy Jo agrees with my opinion--this could be because she's smart and knows that when I'm tired I get cranky (not unlike an infant) and it's in everyone's best interest to agree with me, but I'm pretty sure it's because she knows it's true. But wait, I've got reasons!

Puppy Parenthood v. Baby Parenthood
I could sit here and compare puppies and babies all day, but like I said before, I'm exhausted.
- February 13, 2011