The Bittersweet Airwaves of SiriusXM

My new car (a college graduation present from my Daddy) came with a number of luxury items...one of them being XM radio. To this day, I have no idea how many XM stations there are...but I have a few presets I enjoy listening to. Most of my time is spent on "20 on 20" which is whatever songs are popular at the moment; there are countdowns at 12, 3, 6, and 9 every day in which listeners vote their favorite songs into the playlist. Sometimes it gets a little old because you do run the risk of hearing the same songs over and over. My other favorite station is "Pop2K" which is the music from 2000-today. If I had a nickel for every time I'd tuned into that station and heard BBMak's "Back Here," I'd be rich (which would be an amazing addition to the feeling of joy I receive everytime I hear that song). Also, if you're unfamiliar with BBMak, what the hell is wrong with you? However, I've had a slight problem with XM radio lately.

On a slightly related note, not all XM stations are completely unedited...which, as a huge enemy of censorship, bugs me. The way I see it, I'm not just paying for no commercials--I'm paying for more swears, too. But if we want to be completely honest, I'm not paying anything because the bill gets sent to my Dad (I'm willing to pay it, but who am I to deny him these joys of supporting me?). He closed on his house in Kentucky this morning, so he's a full-fledged Indiana resident now so I figure my bills keep him connected to me. That is the official party line.

I think it was back in July 2008 when Sirius and XM officially joined forces, to fight the evils of commercial radio that this first started happening. I was listening to the 20 one morning when I did not hear the usual rotation of music; instead, I heard some incessant chatter. A morning chat show...and not a good one, like Bob and Sheri. It's called The Morning Mashup, and it is climbing my list of irritating things at an unprecedented speed. Every time I think I have begun to tolerate some of their conversations, my ears are accosted by one of their promo commercials.

They have these little soundbites that play throughout the day (because apparently, it's not a commercial if it's for something that is available on XM), the soundbites are not only the epitome of staged (which always irritates me) but they could not be more stupid. These promos are scripted as though the Mashup DJs live together and face "typical" rommate issues, such as:
So you get the idea, they're moronic. Do they think they're tricking us? Like I'm riding along in my car thin 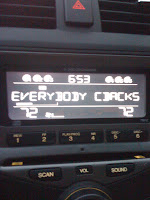 king, "Well I'd love to be the host of a morning show, but I'm not sure if I could live with the people I work with." I hate things that insult my intelligence.

Anyway, everytime the Mashup pisses me off too much, I quickly flip through the channels until I find something suitable. What station has saved me time and time again on my way to school this past week? Nineties on 9. You can rarely go wrong with 90s music. I think people give 80s pop way more credit than it deserves. A lot of it can be quite annoying. I'll take 90s over 80s any day of the week and twice on Sunday.

One morning I heard both the Backstreet Boys' "Everybody" and 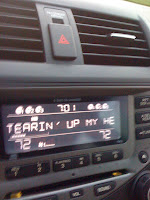 N*Sync's "Tearin' Up My Heart" virtually back to back! And yes, I have been taking pictures of these moments of salvation, in case I want to tweet about them later.

Don't you hate it when you flip over to another radio station only to discover that you've missed hearing the majority of a song you really love? I have no proof, but that might be a level of hell. All you do is sit in a car, stuck in 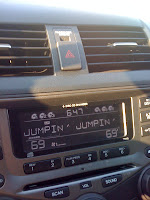 traffic, and everytime you push a preset button you hear the last few bars of your favorite song. For the longest time, I believed I would never hear Destiny's Child (you know, back in the 90s, when there were 4 of them) sing "Jumpin' Jumpin'" all the way through on Nineties on 9. But the other day, it happened. I clicked on preset #3 to hear the end of some song and then, miracle of miracles, I saw "Jumpin' Jumpin'" appear on the screen. That's how I knew it was going to be a great night. If I had a man, I would've left him at home for no other reason than that song told me to.

So, I guess what I'm saying is that whenever SiriusXM pisses me off and I think, "that's it, we're through," it does something like this, and totally redeems itself!
- August 24, 2009

Quick Long Story Short, XM was in bed with Clear CHANNEL MUSIC, AND THOSE CHANNELS only need to be edited and have commercials...Siri did not do that, but they are stuck with it after the merger...