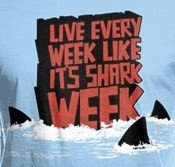 I don't know about anyone else, but I've been enjoying the hell out of some Shark Week. I'll be honest, one of the biggest inspirations for me watching this year's installment of Shark Week was 30 Rock's Tracy Jordan who tells Kenneth to "live every week like it's Shark Week." As you can imagine, when I was listening to the radio last Saturday and heard them announce that Shark Week was beginning the following day, I got pretty excited. Combine my love of 30 Rock with the fact that my classes are over and I have very little to work on right now, and you have a recipe for a sincere dedication to Shark Week 2009.

So I've been watching things like Blood in the Water, a two hour special on the shark attacks off the coast of New Jersey in 1916 which inspired the film Jaws; and Day of the Shark which explains what causes sharks to attack and details a variety of shark attacks around the world. I've learned a variety of things this week...and I still have a lot of unseen footage on the DVR, so I guess there's lots left to learn. Anyway, while watching Day of the Shark last night, I thought I should share what I've been learning with my dear blog readers.

Blood in the Water was great for a multitude of reasons; not only were there reenactments, but there were interviews and testimonials with the reenactment characters...plus there were people in those old-timey bathing suits. Basically, this one Great White Shark attacked five people in a 12 day period off the coast of New Jersey. Three of the attacks took place in the same day, in a creek. It was messed up to say the least. What was crazy about this was that in 1916, no one in the US believed that man-eating sharks lived near the US. So, these attacks are happening and people refuse to believe it...and they keep getting in the damn water! And this one "shark expert" (Dr. Lucas) kept refusing to believe that sharks were attacking people...I really wanted to throw him in the water.

People had all these ideas of what was actually attacking people that were cracking me up! The second guy who got attacked had his legs completely bitten off! Here are some of the suggestions people had to explain what really happened:
While all of those are awesome, my favorite is the turtles. I can't tell

you how many things I've blamed on "vicious turtles" this week. It makes me think of Groundskeeper Willie yelling, "If I don't save the wee turtles, who will?" And then he comes out covered in turtles yelling, "Save me from the wee turtles!" The more I watched, the more I determined that sharks are unstoppable, killing machines. Seriously--they have no weaknesses. Not even kryptonite. After the first two attacks, there was a break for about a week or so and one of the guys said, "we thought maybe it was a once in a thousand year occurrence," and except for the fact that it had already happened twice within about two days, he was right.

So then I'm watching Day of the Shark and they're telling these shark attack stories. I keep hearing the phrase, "typically, sharks don't do this or that, but..." That's when I decided, maybe we should just stop using words like "typically" or "normally" when it comes to sharks. It seemed to me like they are mistaken about what sharks "typically" do. "Well, sharks don't typically attack people out of the blue, except for the thirteen times we're going to tell you about in this hour special." It kinda sounds like maybe, what sharks don't typically do is leave people the hell alone. 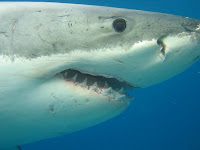 The entire time I've been watching these shows, I'm yelling at the TV, "Why do people keep getting in the ocean?!" Seriously, I want nothing to do with the ocean. Or the beach. I hate them. I plan on saving this Shark Week footage in case I ever have children. When my kids want to know why our family doesn't go to the beach, I'll switch on Blood in the Water. That's why. See, I can't just not tell them about the ocean, because then they'll be like those super sheltered kids who go buck wild once they get to college. I want my kids to grow up in a perpetual state of fear of nature and all its inhabitants. And that's why I'm going to be a kick ass mom.

Here's the other thing about all these shark attack survivors from Day of the Shark: they're all hell-bent on returning to the ocean. They get attacked by sharks, miraculously survive and then there's some clip of them right back in the ocean. And they all keep talking about how they can't be mad at the shark for just "doing what sharks do" and that they don't want the shark to make them afraid of going in the ocean for the rest of their lives. Seriously? Do they think anyone's going to give them shit about staying the hell away from the ocean?! "Dude, I know you got bitten by a shark while surfing, but quit being a pussy and just grab your board." If that is hap

pening somewhere, allow me to go ahead and use some of that aforementioned kick ass mom wisdom and tell you that those people aren't your real friends.

One guy said he's convinced that the shark attacked him because he was wearing camo swimming trunks and therefore looked like a turtle; so he's just not going to wear those shorts anymore. The closest I got to anyone refusing to go near the ocean was this girl who said she doesn't go in the ocean at night anymore (because she got attacked at night). While there are lots of tips on what to do when attacked by a shark, the most effective tip is stay the hell out of the water.
- August 08, 2009