A Cautionary Tale about the Importance of Addresses

Last night I had 3 parties to attend. Three...I had no idea I was so popular. Well, I had some idea. First was my friend's Ugly Christmas Sweater Party! We had to leave that party to go to the Quarter Century Birthday (aka 25th birthday) of my college roommate (and fake sorority co-founder). They were planning on going out to the clubs like all the hip, kids do later that evening. I have no money, so I was just meeting up with them for cake and ice cream at her boyfriend's house.

I've been to this house many times. However, I do not know the house number. I'm more of a landmark person; I remember the strangest things. I know I'm on the right road to my dad's house in Indiana because of the specific pro-life billboards I see (I counted them once). While studying abroad, my friends and I spent a weekend in Barcelona and I managed to get us around town. This might not sound impressive, but I had only been in Barcelona once before...2 and a half years earlier.

This is one of my many unmarketable skills. As you can imagine, this can also be a burden. Sometimes, landmarks change. I could never explain to people where the post office was because they never know what I'm talking about when I say, "It's by the pink house." Once I saw an episode of That 70s Show where Jackie writes out directions and they all sound like, "Take a left at the place I spit my gum out that time, drive until you see the store where I bought that green sweater," that's how I roll. I think it's hilarious, so here's a clip...it's at about minute 5 or so, but it's all good.

I never needed to know his specific house number because the lot next to his house has been empty for 8 million years (give or take). I just drive up to the house next to the empty lot. Can you see where this story is going? We get to the house, and I even say to my friend, "It's so easy to remember which house is his because it's by an empty lot." Hello foreshadowing.

We walk up to the door, and I figured that it would be unlocked since people were coming over. I try the knob...no such luck. I peek in the window and see a kid sitting on the couch. Although I thought to myself, "Whose kid is that?" I also knew that I had no idea who would be at the party, maybe somebody had a kid. So I ring the bell. A woman comes to the door, I ask if my friend is there, she looks at me like I'm on meth and says I have the wrong house. "Well that's weird," I thought, "he didn't move did he?" As we were walking back to the car, I noticed the house next door...with a familiar statue on the front porch. And that's when it hit me: I am at the wrong house. We quickly went to the right house and everything was fine (other than me feeling like an idiot). Apparently one of my other old roommates had made the same mistake the previous weekend. 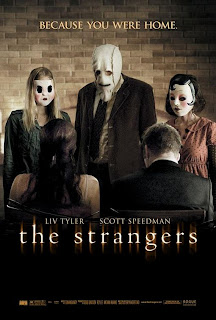 The really weird thing about the lady who lives at the wrong house was the expression she had on her face when she came to the door. It was the look of terror. I felt like in her eyes, I looked like one of the bad guys from The Strangers. I never saw that movie because the previews alone set off my paranoia and I'd have to change the channel. I saw the DVD in Target the other day and freaked out just a little. If you don't remember that one, it's the one where the lady looks outside and there's 3 people standing in her yard with bags over their heads and I guess torture ensues. Part of the reason it scares me so much is that I remember overhearing my dad talking with someone once about a similarly grotesque crime that happened in the central Kentucky region in the 70s or something. The people were tortured, murdered, dismembered, all kinds of super sick stuff. And I just noticed on the imdb page that the movie is based on a true story...this merits investigation. *Just investigated: it's NOT a true story, but there is some "inspiration" from true crimes.

But anyway, this lady's looking at me like I've come to kill her. I'm smiling, holding a birthday card and I'm with a friend. Both of us are in the 5 ft. height range. What did she think we would accomplish? But if I'd been in her shoes, I would've done the same thing (only worse because I'm super paranoid). The lesson to take away from this story is to learn people's addresses.
- December 13, 2009