It's my firm belief that you can't read enough about the tragedy that is my experience with online dating. So I've compiled a greatest hits list of sorts. Some are pictures of messages and some are just synopses of profiles. 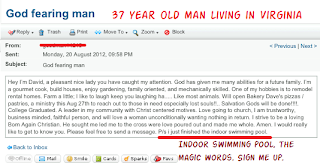 Here's a two-part message from a guy a little closer to home.

I've gotten plenty of winks and smiles from guys who live far away. The farthest has to be Australia. Talk about a practical relationship. I've also been getting a lot of attention from African American guys...I'm not against interracial dating, I've just never been particularly attracted to black guys. Part of me wonders if they see that I've got big boobs in my profile picture and assume my butt matches. It most certainly does not. I'm afraid I'm going to have to post a butt picture so they don't waste their time.

I've also gotten some responses from older guys. A lot older. I've even updated my profile to inform guys that if their age is closer to my parents' than mine, they should just keep on scrolling.

Here are the highlights from the most recent man who can't resist me...he sent me a card on Christian Mingle, lettng me know that he thinks I'm beautiful.
And the kicker...this is the opening line on his profile. For the past 18 years he has been impotent. Just let that sink into your mind grapes. I appreciate that he's being honest, and I feel bad for the guy...but damn. I don't really know what else to say. Unless it's a trick, like on Friends when Paul the Wine Guy gets Monica to sleep with him by telling her that he's impotent and he makes it seem like she fixed him. If that's the case, this guy is out of luck because my lady parts do not moonlight as some sort of superhero ridding the world of impotence.