Just Because You Can Talk, Doesn't Mean You Should 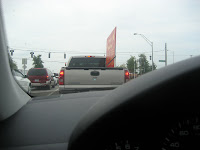 The other day, I was on the phone with Amy Jo while I was on my way home from the doctor. I was about to hangup when I noticed a pickup truck next to me with a gigantic wooden sign bolted to the truck bed. One side was talking about how Obama is a communist and I was cracking up.
I was able to get 2 pictures. In the first one, you can see that the sign is red (ya know, for the Commies) and that clearly, this man has safety as his number one priority (I mean, talk about a blind spot)! In the second picture, you can't see what the other side of the sign says...but it's an upside down f 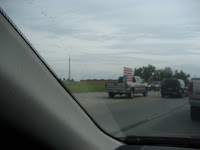 lag and I've already forgotten what all it said, but you can bet your ass it was stupid, unfounded and made no sense.

Amy Jo and I have watched this video twice. Twice. It's the New Left Media coverage of the September 12th "DC Tea Party". Basically, it's proving that the majority of the people boycotting the Obama administration right now have no idea what they're talking about; they're just following all the jackass pundits like Glenn Beck, Rush Limbaugh, etc.

It saddens me to watch something beyond retarded and know that these people are not receiving the special education they so desperately need.
- September 21, 2009