I've been fever-free all day and am hoping to return to school on Tuesday (can't be too safe)! Since I got the swine flu, everyone has been asking two things:
What kind of blogger would I be if I didn't take you through the swine flu journey? And what type of journey has no pictures? 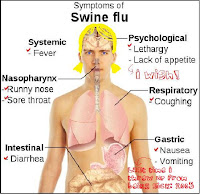 Without further adieu, I give you the [curly] tail of swine flu. *Note, I just made that "tail" pun up and I'm pretty impressed with myself.*

I wasn't surprised when after only a week of student teaching I was starting to feel sick. I'd heard countless times that your first year of teaching would include a lot of illnesses while your body builds up an immunity to germ-filled students (no offense). I had a nasty cold and it took me a good week to get over it, but I was on the mend. By the end of Labor Day weekend, I was back to not feeling so hot. On Tuesday (Sept. 8), my voice had a quality that few ach

ieve without a life full of chain-smoking menthol cigarettes in between shots of Jack Daniels. I woke up at 4 A.M. on Wednesday to discover that not only was I sick to my stomach, I was shivering. But as I had learned (and sang) in Moulin Rouge, the show must go on. I hope you enjoy the chart I found displaying the swine flu symptoms...it was a picture of the generic medical chart guy, but I doctored it up with some blonde pigtails (official hairstyle of the swine flu) and blue eyes so it would look more like me.

I was all set to go to school when Amy Jo had me take my temperature and discover that it was a bit low (which is not unusual for me...I may be a reptile). Combine that with my shivering and she ordered me back to bed. I went to the doctor and got the flu test (the previously mentioned plastic stick up my nose--the man in the picture doesn't like it either). Dum, dum, dum! Flu A, H1N1 strikes again! Enter: Super sexy surgical mask.

Oddly enough, when the Physician's Assistant was giving me the mask and explaining why I had to wear it in public (which I totally get) she had this odd ability to make me feel guilty. She's telling me that this virus could be fatal to anyone with a compromised immune system (chemo patients, AIDS/HIV, etc.) and I totally understand that! It wasn't like I was not going to wear the mask; I put it on right away. But she went on, "If there's anyone out in the waiting room who's going through chemo for breast cancer or something, they could've already caught this." Like I knowingly strolled into the waiting room to cough on people. Do I have a look about me that says, "I like to spread disease"?

Did she think I'd been living under some rock for the past year and am completely oblivious to the swine flu? If she didn't fully drive this point home I was going to leave her office, go next door to the hospital, cough on the babies in the maternity ward and maybe lick all the spoons in the cafeteria...lucky for her, she got her point across. I told them on the phone that I thought I might have the flu, so they knew full well what they were dealing with. Maybe they should have surgical masks at the door and everyone should wear them. That's not a bad idea.

When you walk out of the doctor's office with a surgical mask on, in the middle of an illness (that many are seeing as a potential pandemic), there are several ways to handle the situation. I chose the walk-super-fast-make-zero-eye-contact-and-immediately-start-talking-on-my-phone approach; but you do whatever works for you. I have not left the house since Wednesday, except for Friday night in which I rode through the Dairy Queen drive-thru with Amy Jo for some blizzards. I don't care to be seen walking about in my mask (attractive as it is).

The picture to the left is me in my mask(s). The mask on the left is the one they gave me at the doctor's office. It wasn't as sturdy as the other, but the loops went around my ears and didn't mess up my hair (very crucial). The mask on the right is one that Amy Jo bought me. Fun fact about Mask #2, it's recommended by the CDC to help prevent spreading the flu. But it has rubberbands and the potential to mess up your hair--unless you discover (as I did) that pigtails are the perfect hairstyle for mask wearing.

One of the main things the swine flu has taught me is to not be a whore. I imagine you're confused by this. First of all, it's not like I was toying with the concept of becoming a whore before I got the swine flu and the illness showed me the light. But calling and texting my friends to let them know to spritz their shit in lysol, go to the doctor if they feel bad and apologize for potentially making them sick was not fun. It was embarassing. I can't imagine having to do that on a regular basis about much more serious issues such as a burning sensation when you pee. And these calls were to my friends--I don't think I'd like making them to guys saved in my phone under monikers such as "Beer Goggles Brad," "That Bro From Two Keys," and "Steve??".

That's all for this swine flu post, my next post is a fun look at my thoughts while cooped (or penned) up.
- September 13, 2009