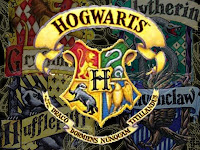 I went to see Harry Potter and the Half Blood Prince the other day, which was really good by the way (sorry, Maggie). And while I was sitting there I had a revelation: do you know the one thing missing at Hogwarts? A foreign language department. Actually, I had two revelations, the other one being that I think I'd play Quidditch if it was a real sport. But anyway, why is no one at that school learning a foreign language? Just because you're a wizard doesn't mean you can get by on English alone. As far as I know, there's no spell that translates for you. 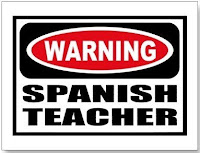 I've decided that once I have my Master's Degree, I should become the Spanish teacher at Hogwarts School of Witchcraft and Wizardry. I could head up the foreign language department...all we'd need to do is find someone to teach Parseltongue. I mean, wizards or not, these kids are going to be part of a global economy and therefore should learn another language. And as long as I'm at Hogwarts teaching...they should probably go ahead and teach me how to be a wizard. Let's face it, it just makes sense. Besides, if I'm going to be keeping an eye on these kids I'll need to know some tricks of my own.

I'm sure it will be tricky to get everyone at Hogwarts on board with the idea...British people aren't known for their willingness to learn languages other than English. But I'm a fairly persistent person, so I think I'll be able to persuade them.

OK, wait, I lied. I actually had three revelations about Hogwarts. Why don't any of those professors have their doctorates? Even Dumbledore doesn't have one, and he's like 150 years old. I'd think he'd at least have an honorary doctorate from somewhere. Do they even have Master's? I mean, that's a requirement for all Kentucky teachers--how is Hogwarts getting by without something like that? If I ever meet J.K. Rowling, I'm definitely going to enquire about that.
- July 17, 2009