A Series of Intriguing Events

I’ve had a number of interesting and amusing occurrences in my life over the past few days, and I’ve decided to update you on them.

I played miniature golf the other day, and I did surprisingly well. I got 5 hole-in-ones over 3 games… 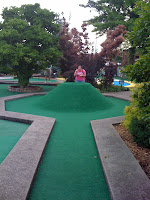 I’m probably going to go pro. We went to the Biblically-themed putt putt course over by the Lexington Ice Center. If you’ve never golfed here, you are missing out. There are 3 courses: Old Testament, New Testament, and Miracles. I don’t want to brag, but my friend and I did all three. We’re significantly hard-core. Anyway, back to my amazing performance. Check out this picture of the first hole-in-one I got.

You, dear readers, are enjoying the blog of someone who managed a hole-in-one on the dreaded hole at the top of a hill shot. This is the Mount Sinai hole on the Old Testament course, in case you were interested. After I made the shot, we all just stood there in disbelief for a little bit. We also discovered that I cannot do it twice in a row. 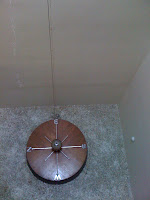 This next event might not seem so insane to the Average Joe...but believe me, it is! In the Asher Science Center at Georgetown College, there is a pendulum. During my sophomore year, my roommate and I would pass by the Foucault Pendulum every day before going to biology class (rounds 1 and 2...that's right, we had to take it twice). We invented a rule that if the Foucault Pendulum was ever not swinging, that meant we didn't have to go to class. We also determined that it probably was an indication of the end of the world. So on Monday, I was going to the first meeting of my class in the science building. As I walked by the pendulum, I decided to take a peek for old time's sake. Motionless. That's right, the Foucault Pendulum was not moving. I took a picture and texted my friend. I also went to class (despite the previous ruling). Perhaps the lack of pendulum activity can be directly related to the other extraordinary experiences of this week.

Yesterday, some friends and I decided to have a picnic dinner in Woodland Park. The plan was to eat and play on the swings. I could not have been more excited about the swings; I’ve had the urge to go swinging for about a month now (not sure why) but it just wouldn’t go away. So we’re in the park when we see a couple walking their pets…3 fairly large dogs and 1 Shetland pony! That’s right. 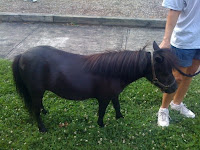 Not only did I get to swing, I also got to meet a pony. The owners appeared to grow weary of all the attention they got with their pony. Ummm, you have a pony in a public park–how are you not looking for attention? Ultimately I decided that I feel bad for the pony. I assume they live around there and there’s no house in that area with what I would consider to be adequate space for a pony. I also came to the conclusion that their house probably smells really bad. But seriously, who has a pony in the city?

I didn't know she had a pony. How was I to know she had a pony? Who figures an immigrant's going to have a pony? Do you know what the odds are on that? I mean, in all the pictures I saw of immigrants on boats coming into New York harbor, I never saw one of them sitting on a pony. Why would anybody come here if they had a pony? Who leaves a country packed with ponies to come to a non-pony country? It doesn't make sense... am I wrong? ~Jerry Seinfeld (Seinfeld, season 2, The Pony Remark)

And the evening only got more interesting! We saw a car painted to look like a bag of Skittles (tropical Skittles, to be precise). And I’m not mentioning all the weird things we see d 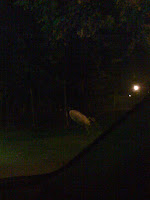 own there on a regular basis, because they no longer register as being weird. When we finally decided to leave the house we were at (circa 3 A.M.) I got in my car to discover the most evil devil bug residing on my windshield.

See that large grayish-brown thing on the windshield? That is a bug! It was ginormous…like a rat with antennae, or maybe not. Whatever, it was big. And lemme tell you, this bug was brave. I started driving and he didn’t leave. He even survived the windshield washer action I threw his way. Honestly, I thought I’d gotten rid of him when I looked out the passenger window and saw him still clinging to the car. That’s when I decided this bug was probably planning on murdering me. When I got to our destination, I was a little scared to get out of the car. I assumed it was safe to say that he was angry about my attempted washer fluid drowning. I got out of the car, and there he was. He crawled back onto the windshield and I ran inside. When we left at 4 A.M. he was nowhere to be seen…but I still think he was hanging around somewhere. I expected to get home and

have him attack me since I would be sans-escort. He didn’t.

I’m not 100% sure what kind of game this bug is playing but I’m confident in saying it’s not over. I feel like I’m going to turn around and there he is. I guess what I'm trying to say is that I always feel like somebody's watching me. That bug is turning into the money I could [allegedly] be saving with Geico.

maybe this isn't PC, but I will go there:

How awesome would it be to see a little person riding the little pony!?

Sometimes, you just have to say things...political correctness be damned! I actually really wanted to ride the little pony, but I'd bet a decent amount of money that I weigh more than it.