An Open Letter to Bluetooth Users

I think it's time for me to write a long-overdue letter to a group of people I've loathed for quite some time: People who use a Bluetooth. I actually started writing this blog during June of 2008 but got distracted and never finished it. Then, during a spirited round of "The Three Name Game" the other night, I heard a friend use the word "douchebags" to describe people who use Bluetooths. It was then that I realized I never did finish this post and should probably get crack-a-lackin on it.
Dear Bluetooth User,

It is my firm belief that the Bluetooth was created to reduce the number of car accidents caused by jackasses who can't talk on the phone and drive at the same time. I think that's a great idea. I wish I had thought of it--and not just because I would be rich, but because it's a good idea. I'm not opposed to using some form of handsfree phone apparatus while around the house. If you're going to be on the phone for a long time it's a great way to multi-task and gets some things done.That being said, I have a bone to pick with the majority of Bluetooth users.

Stop using the damn thing when both your hands are free. Not only is that one of the laziest things I have ever seen (and believe you me, I've seen laziness) but it makes you look like a crazy person. For some reason, not holding a phone makes people talk louder. I have no desire to hear everything you have to say. If I wanted to hear all about your day, I would be friends with you and perhaps I'd be the person on the other end of that call. And if you want me to be friends with you (trust me, you do), get rid of that stupid Bluetooth.

As long as we're on the subject...your Bluetooth is not an accessory. I'm talking to you: guys I see in bars/clubs wearing the Bluetooth as though you're going to take an urgent call at any moment. Do you know what you look like when you accessorize with a Bluetooth? I will tell you. You look like an asshole...and you probably are.

And by the way, lady Bluetoothers, if your hair is long enough to cover your ears that means it is also long enough to hide your Bluetooth. This makes you look like a crazy person who talks to themselves. I guess this point can also be for long-haired guys...attention long-haired guys: cut your hair. Unless your one of a very, very few celebrities who can pull off the longer locks (I'm talking to you Johnny Depp), I'm going to go out on a limb and say it looks gross.

If you walk around public with a Bluetooth in your ear, we all hate you and it's high time someone told you. It doesn't stop there, we talk about you...all the time. Luckily, this situation is easily remedied. All you have to do to regain our respect is take that thing out of your ear and never use it in public again. But if you're considering using the speakerphone option on your cell, let me just go ahead and stop you right there. That is a completely lateral move in my book. So just use your phone like a normal human being. Or even a monkey that's been trained to hold a phone. 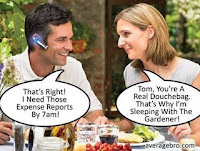 It might be a little weird at first, actually holding the phone to your ear. But I promise you, it's just like riding a bike and it'll all come rushing back to you. I had a choice of comparing it to riding a bike or to sex, as those are two things that people rarely forget how to do. But, if you've been using a Bluetooth there's a good chance no one has had sex with you in awhile either (and yes, the two are related).

The bottom line is: If you give up your Bluetooth, cold turkey, not only will you regain the respect of society but people may very well want to have sex with you again. Even if you don't care about my respect, I'll bet you miss getting laid.

P.S. The font in this post is a bit jacked up...I'm not trying to emphasize certain phrases by switching fonts, but these words are reluctant to switch back to a more uniform look.
- July 01, 2009