This is another update full of random things I've seen and/or heard over the past few days that have struck me as odd. First up, we have a truck I saw while driving in Richmond. Apparently, there is a place called Uncle Charlie's and, according to their truck, they've been specializing in "Tender 'N Juicy Eatin' Meats" 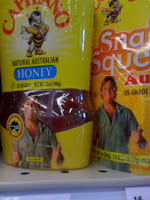 I saw the next item while I was shopping at Kroger. I saw this honey with Steve Irwin's picture on it. Does this strike anyone else as distasteful? I mean, the man is dead. And it didn't happen too long ago. Does his face really need to be on products? I don't think so. Besides, Steve Irwin isn't going to influence my honey purchases. Actually, now that I think about it, there isn't anyone (dead or alive) who is going to influence my honey purchases.

While watching TV the other day, I saw the newest FreeCreditReport.com commercial and while it's not my favorite it's not the worst one they've done. In the beginning, I enjoyed the songs on those commercials. I'm also a pretty big fan of the guy that sings them, but that's another story. Is it just me, or have they been forcing those songs lately? You can't force those things, they just have to happen. Don't they realize it's quality over quantity? If they keep cranking out crap songs, everybody is going to hate them; and I don't want that. So if you're reading this, FreeCreditReport.com people, get ahold of yourselves! I don't want to have to hate you...but you're pushing me!

A good number of my friends work at Starbucks, which works out well if you enjoy free drinks (and I do). If you're looking for a new drink to try there, I recommend the Passion Tea Lemonade with raspberry (specifically a Venti with 4 pumps raspberry and 2 pumps classic)--it's delightful!

Anyway, I was visiting one of them last night and when I finally left I saw a car in the parking lot with a confusing bumper sticker. It said "Thank You President Bush" but I couldn't determine whether or not it was sarcastic. I searched for another bumper sticker that might indicate the mindset behind this one, but there was nothing! It bothered me all the way back to Richmond. If this was on my car, you'd better believe it would be sarcastic.

There's a slight downside to this post. While doing a Google Image search for the "Thank You President Bush" bumper sticker, I found it on the George W. Bush Store website. It's not sarcastic, it's serious. I'm so disappointed. Why would you put that on your car? Do you want people to know you're a moron?
- July 17, 2009