A funny thing happened last week in regards to online dating and what kind of blogger would I be if I didn't share it with you? That's right, not a very good one. As you may remember, online dating is so much fun that I belong to multiple sites. I've been using Match and Christian Mingle. As I have previously posted, Christian Mingle tends to be the site with all the creepers. Who could forget this little gem or his text messages? And the rest.

One thing I will say for Christian Mingle is that they have this fun Question of the Week. It seems like a good idea. There's a different random question every week and you have the option of answering it and/or reading other people's answers. I rather enjoy this because I like answering questions that I know the answers to. And unlike AP Calculus in high school, I actually know the answers to these questions! *Sidenote: if you never know the answer in a math class, don't just always answer with "Seven!" every time the teacher calls on you. They don't realize how hilarious it is. 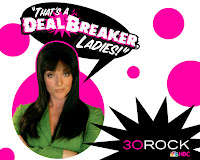 Last week's Question of the Week was: What are 3 dealbreakers you have when dating? I was definitely going to answer this one...the hard part would be narrowing it down to just three (I'm kidding, kind of). Plus, I can no longer hear the word "dealbreaker" without thinking about Liz Lemon's Dealbreakers skit and subsequent book on 30 Rock last season.

Here was my answer to the dealbreakers question:

Pretty simple and straightforward. Honestly, I'm a little surprised that Christian Mingle approved this answer. We are talking about the site that censored me for using the word pissed. I knew that there would be plenty of people who wouldn't agree with me, which is fine. You don't have to agree with me just because I'm right. If you like being wrong, that's cool. Seriously though, believe whatever you want to believe. I wondered whether or not I would receive any backlash from my post; and I didn't have to wonder for long. I received two messages about my answer. And here they are:

Stark disagreement. I don't think anyone has ever accused me of being in stark disagreement with anything before. But then again, if most people are like me then the only times they think to use the word "stark" would be before the word "naked" and when talking about Iron Man's true identity, Tony Stark.

Read the Bible from cover to cover. You'll have to forgive this guy because he doesn't know that I actually have read the Bible from cover to cover (true story, I have). Or perhaps he does know. It's been quite awhile since I did it; maybe he wants me to do it again. This time I think I'm going to go around the outside cover to cover. It'll be much faster that way. And I had to leave the majority of his picture in for you to see. Isn't it funny how the people who are so anti-homosexuality/homophobic often turn out to be gay themselves? I'm not saying that this guy is gay...I'm just providing a little food for thought to go along with that picture. Let's be real, it's not the most manly pose he could've struck.

I'm proud to say that I didn't respond to either of these messages. There would be no point. I didn't even respond to correct the plethora of grammatical errors that were jumping off the screen at me. I did take some action; I added a footnote to my answer to deter any other messages such as this one.

Other than that, it's been business as usual on Christian Mingle. You know, just ignoring old men who "smile" at me repeatedly until they finally message me saying, "We should meet," and I have to say, "No thank you. I'm looking for someone my own age." Because that actually happened this week, despite the fact that I had recently added this to my profile: