I know I've already made an entry about TV. If you want to get technical about it, I've made several posts regarding television. If you don't like it, that's just too damn bad because TV plays a significant role in my life (or lack of a life).
.
Commercials, by nature, are annoying. There have always been rare ocassions in which a commercial really makes me laugh. Lately I seem to be amused by more and more commercials. I don't know whether this means that commercials are getting better or my standards for entertainment are dropping...but I won't think about that. 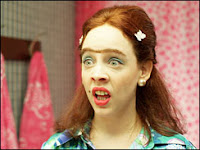 I love the commercial for Planter's Cashews where the really unfortunate looking woman is walking down the street and all the guys are following her, completely mesmerized. What's her secret? Well, she simply dabs a cashew on herself before leaving the house. I've done a bit of Google image research and discovered that the actress playing the hideous woman is pretty. It's amazing what they can do with makeup!
.
I know a lot of people are annoyed by the Free Credit Report.com commercials, but I love them! I won't lie to you, those songs get stuck in my head. It's one of those things 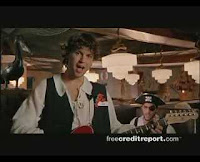 where you're walking around humming something, totally rocking out, and you can't remember the name of the song. If you're like me, it will bug you and bug you until it hits you like a ton of bricks and you finally realize what the song was. This happens to me several times a week and the realization is typically, "Oh that's the one FreeCreditReport.com commercial." About a month ago I was at a restaurant, sitting on the patio where there was a live music group playing. I kid you not--they played one of those songs! That's when I discovered I'm not the only freak who gets a kick out of them. I don't know if the group covered any other commercial jingles in their set or not, but they totally should. 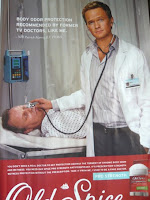 I'm torn over most Old Spice commercials; half of them make sense and are legitimately funny, and the other half are painfully unfunny. There is one out now in which Neil Patrick Harris is recommending Old Spice to control body odor as a former TV doctor. He's acting so serious the entire time, I love it!
.
There is one awkward commercial that disturbs me every time I see it. It's for some pregnancy test and they're talking about how advanced the test is, it can tell your eggo's preggo before any other test or something. The final line of the commercial is, "It's the most sophisticated piece of technology you'll ever pee on." And then there's a stream of liquid that seems to fly through the air in slow motion and hit the pregnancy test. That's a special kind of classy right there. Also, your personal life is your own business, but I should hope that a pregnancy test is the only piece of "technology" you pee on. I've been pricing new laptops lately and they're expensive. No matter which one I get, I know damn well that nobody's going to be peeing on it.
.
No conversation about commercials could be complete without mentioning the Bud Light "Real Men of Genius" radio commercials. These are simply the funniest commercials I have ever heard. Why is it these commercials are only on the radio? If these came on TV, I would not hit mute during every commercial break or leave the room. Since the key demographic for these commercials is men, I'd probably have to watch more ESPN too. I could do that. I just discovered that not only can you listen to these commercials at http://www.budlight.com/ you can also download them. Sweet. You can bet your ass that when I get the aforementioned new laptop, I will be downloading the Real Men of Genius and using them to spice up mixed CDs I make for people or myself. Who wants one?
- July 24, 2008