When you're little, your favorite foods are not very sophisticated. There was a 6 month period of my life in which all I ate was peanut butter and jelly sandwiches. Will went through a phase in which he rarely ate anything other than chicken nuggets (preferably McDonald's). We would offer him chicken tenders, explaining that it was the exact same thing except for the fact that the tenders did not contain the same mystery chicken parts as the nuggets. I have a vivid memory of our family going to Fazoli's for some real Italian real fast, but first we had to go to the McDonald's next door and get Will his Chicken McNugget Happy Meal. And we sat there in Fazoli's, Will eating his combination of McNuggets and free breadsticks.
.
I guess I assumed that when I got older, my tastes would mature as well. Not so much. Don't get me wrong, I love fancy foods too, but I'll never outgrow my love for PB&J, mac n' cheese and pizza. And to be perfectly honest, I love that about myself.

There's something wonderfully nostalgic about those foods. Maybe it's the childhood memories that come flooding back or the reminder of a simpler time that I love so much. It doesn't hurt that they are all incredibly delicious.
.
Pizza has to be the best of them all. I cannot think of an instance in which I did not want to eat pizza. I may have turned it down because I wasn't hungry or because I didn't like the toppings, but it was never because I wasn't in the mood for pizza. There are some foods you have to be in the mood for, you know? I can't eat Chinese food if I'm not in the mood. If I'm breathing (and I almost always am), I could go for a slice. 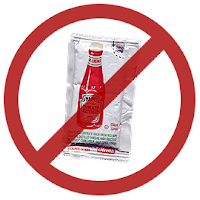 .
I think what puts pizza a step above PB&J and mac n' cheese is its versatility. Sure you can get a little crazy with PB&J...crunchy or creamy and of course a vast array of jams and jellies; but it can't compare to the variety to be found in pizza. As far as I'm concerned, there is no variety in mac n' cheese--if it ain't broke, don't fix it. My friend Meg puts ketchup on mac n' cheese...I don't even want to go there. Defiling the perfection that is mac n' cheese with something as vile as ketchup?! If there had been more than 7 deadly sins, you'd better believe that would've been #8.
.
My favorite pizza is ham and pineapple (aka pine & swine). It's delicious and I highly recommend it. I thought it sounded gross at first, but it's so tasty. Speaking of gross, let's talk about ketchup. I hate the taste, I hate the smell, I hate any other aspect of ketchup you can name. Will also hates ketchup, although he hates it because our former stepbrothers used to tell him it was made from the blood of dead people. I don't have a deep-seated psychological issue for hating ketchup, I'm just picky.
.
Sally: I'd like the chef salad please with the oil and vinegar on the side and the apple pie a la mode.
Waitress: Chef and apple a la mode.
Sally: But I'd like the pie heated and I don't want the ice cream on top I want it on the side and I'd like strawberry instead of vanilla if you have it if not then no ice cream just whipped cream but only if it's real if it's out of a can then nothing.
Waitress: Not even the pie?
Sally: No, just the pie, but then not heated.
~When Harry Met Sally
- July 28, 2008