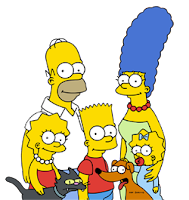 I love The Simpsons. I never watched it growing up, it was a member of the lengthy list of shows my mother did not want us watching. Other members of that list include: Ren & Stimpy, anything on MTV and she had to watch Rugrats with us to make sure it was OK. Now that I think about it, the ban on me watching MTV was never actually lifted. So, in theory, I am 23 years old and not allowed to watch MTV. Fortunately I've never felt too compelled to watch the majority of shit produced by MTV...although I do love me some Next.
Back to The Simpsons: The show is in its 20th season. Twenty. The Simpsons is older than my brother. Speaking of my brother, he's the one who got me interested in the show to begin with. Will and I share a penchant for TV and movies. We also share an ability to quote said TV and movies after one viewing. We have been known to pass the time by quoting movie lines to see if the other can guess the movie. It is quite a talent. I think it might be one of my best skills; unfortunately "uncanny ability to recite entertaining movie lines" is not a highly sought after job requirement. Before we knew it, we were watching (and quoting) the show all the time. We can also relate almost any occurrence (great or small) in life back to The Simpsons. Not everyone appreciates this skill so sometimes we have to hold back, which is hard.
.
I would also like to take this time to address the highly controversial issue of the Simpson family's home state. In Season 11, Episode 248 entitled Behind the Laughter the narrator states that the Simpsons are from Kentucky. Chalk up another one for awesome things to come out of Kentucky. Johnny Depp, George Clooney, The Simpsons, you're welcome world. And suck it all you other states who claim ownership to America's favorite family.
.
Just today I received an email from Amazon stating that Season 11 would be released on October 7, 2008. Finally! If I have one complaint about The Simpsons it is their DVD release process. Season 10 came out last August. How has it taken over a year to release season 11? They completely missed the opportunity for Christmas sales--now that's just stupid. There are still plenty of seasons yet to be released so why draw out the process? And if you insist on making us wait for DVDs, at least bring some regularity (may I suggest Fiber One yogurt?) to their release. It wouldn't be hard to create a time-table for each season's release, spacing them by 6 months or so. I would prefer 6 days, but I'm willing to compromise. If you ask me, Fox could be a little more "fair and balanced" with its DVD release.
.
Come October 7, you'd better believe I'll have Season 11! Feel free to join me for the viewing.
- July 24, 2008

Email ThisBlogThis!Share to TwitterShare to FacebookShare to Pinterest
Labels: movies, The Simpsons, tv