No matter how many amazing things my younger brother does (captain of the soccer team, bio-medical engineering major at Purdue, etc.) I will always see him as Batman. Between the ages of 2-4 Will was Batman. Every day he dressed up as Batman. He had Batman costumes for both summer and winter, not to mention pajamas for bedtime. Although, no matter the weather, he always wore these black snow boots that really tied the outfit together.

It wasn't enough to just dress as Batman, he also had to watch Batman. He watched the movies. I refused to watch them because they scared me. In Batman Returns, Michelle Pfeiffer becomes Catwoman when she falls and all these alley cats start licking her open wounds--gross. So she becomes Catwoman and promptly stabs the hell out of a bunch of stuffed animals and puts them in the garbage disposal. As a lover of all things plush, this disturbed me greatly and I haven't watched it since. Will, on the other hand, was banned from doing his Danny DeVito Penguin impression at daycare because it scared the other children.
I would, however, watch the 1960s Batman TV show reruns with him. If you've never seen this gem of a program, you haven't really lived. The movie is also amazing. My favorite line in the movie was "Quick, hand me the shark-repelent Batspray," there was a mechanical shark clamped onto Batman's leg, but luckily Robin had the shark-repelent Batspray on hand so everything turned out alright. 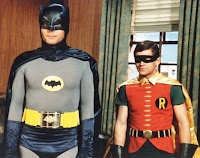 You see boys and girls, before Adam West was mayor of Quahog, he was Batman. He wasn't as phsyically fit as you might expect (or demand) Batman to be. It really looked more like your dad was fighting crime. The show ran from 1966-1968, but they did 2 episodes a week so it's like they were on for 5 years. According to Wikipedia, the genre of the show is "pop art camp comedy," which I think translates as "hilariously shitty." I haven't crunched the numbers myself, but I believe the show operated on an annual budget of $17. Who needs fight sequences when you can just write KAPOW! WHAM! across the screen?

My favorite villan was Louie the Lilac (played by Milton Berle). Like a true badass, Louie dealt in illegal perfume. He also ate lilacs for some unknown reason. And I almost forgot, he had control over the hippie flower children of Gotham. That is not very threatening. Illegal perfume dealings? I don't even know what that means.

I've actually gotten away from the entire purpose of this blog (a pattern in my stream-of-consciousness style writing). My point was: Who in their right mind moves to Gotham City? What did they have that made tolerating the antics of villans worth it? An amazing public school system? Low taxes? I don't know. And it's not even like the police force is any good! They entrust their safety to a grown man dressed up as a bat. If ever I live somewhere and our public safety depends solely on a man in a costume, I will move. Property in Gotham had to be dirt cheap.
- July 20, 2008