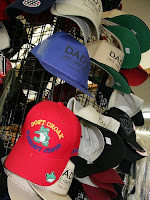 Today I received the best advice ever from a t-shirt. It said, "Don't Croak Without Jesus," and there was a frog on it. Wise and clever. I already have Jesus, so I was way ahead of the t-shirt. However, it did get me thinking about religion. Not in a deep, philosophical way, but from an advertising and propaganda stand-point.
.
Have you ever noticed that no religion other than Christianity has t-shirts, bumper stickers, keychains, etc.? A lot of religions aren't as big on conversion as Christianity, so I guess that could be a factor.
I did have a friend in high school who had a hoodie that said, "Jews in the Hood." I still wish I had one of those!
.
I suppose another factor could be that Christianity is the predominate religion in America. Maybe cars in the Middle East have bumper stickers that say things like, "Know Allah, Know Peace; No Allah, No Peace." It's definitely something to think about.
- July 20, 2008