While at work yesterday, I determined that I should write a book. This collection of true stories I've experienced on the job would be called Yes, People are that Stupid: The True Story of Kroger 708. That is a working title, so I'm open to suggestions.

Day in and day out, I fall victim to some of the most ignorant and idiotic conversations to ever take place on this (or any other) planet. I base my break and lunch schedule on who's in the break room at that time. I try to nonchalantly walk past the break room to see who's in there before I clock out. If the crowd is particularly irritating, I wait. Sometimes I don't have time to do my walk-by or certain company cannot be avoided. And as I discovered yesterday, you can be surprised by the stupidity of those you typically deem "normal."

When I walked into the break room yesterday the first thing I heard was one woman quoting the Bible. If you ever walk in on a conversation in which the Bible is being quoted, I recommend walking away. As a general rule, when someone's only response is to repeatedly quote the same Bible verse to you, you are not in for a good time. I'm not saying it's impossible to enjoy a religious or philosophical debate but if it's with a close-minded, ignorant individual you'll end up just wanting to pull your hair out.

The Bible verse she was quoting was 1 Timothy 3:12 (although she didn't know that's what verse it was) which states, "Let deacons be the husbands of but one wife..." She was quoting this to prove her point that women aren't supposed to be religious leaders. There was an article in yesterday's paper about a woman who is becoming an ordained priest by the Roman Catholic Women Priests (http://www.romancatholicwomenpriests.org/). The woman in the article fully expects to be excommunicated by the Roman Catholic Church because they do not allow women to be priests. Here's a link to the article: http://www.kentucky.com/158/story/475310.html

I listened to her solitary argument against female religious leaders and told her I felt that anyone could be a minister. I believe that although the Bible is God-breathed, it was written by men who are fallible. I think that some men didn't like the concept of women leaders and so they changed "she" to "he" and that was that. I explained that in some of my mandatory religion classes at Georgetown we learned about women who had very prominent roles in the church. She replied with her standard verse recitation and then her break was over so she left. 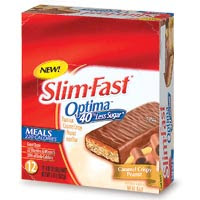 Oh well, she didn't respect or listen to my viewpoints but at least she was gone and I could enjoy my surprisingly tasty Slim Fast meal replacement bar in peace. *Note: The flavor pictured (Caramel Crispy Peanut) is the tasty flavor of which I speak, in case you're interested.* Or so I thought. Before I knew it, another woman came into the break room and began complaining about this soon-to-be-priest and how she needed to know her place in the church.

At first I thought she was joking, I mean, it sure as hell sounded like a joke. This argument was even better than the first. No Bible quotes, but she did express such valid points as, "that's just silly," and "there are rules." Plus, she actually was a Catholic and she had no desire to go to confession to a woman. I put that in italics because she said it with some sort of disgusted inflection. She said a woman wanting to be a priest is like a man wanting to be a nun. Not exactly, men could be monks. I brought up that all this woman probably wants to do is teach people, preach sermons and whatnot. I eventually just stopped talking because no one was listening to me.

It's so frustrating to be surrounded by people who are so close-minded. I have very strong opinions and I love to voice them but I also love to hear how other people feel. Everyone is entitled to their own opinion, and as long as you can back it up and explain why you feel the way you do, that's cool. But if you're just blindly following whatever your parents or church or anyone else tells you, that's when I have a problem. You should always know why you believe what you believe.

Exclusion is just one of the many things I think Jesus would have a problem with his "people" preaching. Also topping the list are hate and judgement. I have no problem with Jesus, I'm very pro-Jesus.

It's his people that I often clash with. Those people who I assume I'm not a Christian because I don't go to church or talk about Jesus all the time. But don't get me started on all of that.
- July 31, 2008