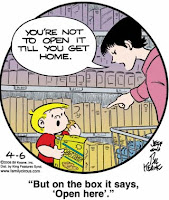 Let's get one thing clear: I hate the comic strip Family Circus. It is never funny and it's almost always preachy. Reading Family Circus is like watching a show like Kids Say the Darndest Things. It's very cutesy and corny but it is never funny. I think it's hilarious when kids say things they've overheard their parents say; things like curse words. You will never see any of the Family Circus children curse. They just sit around and say things like, "Why is it called e-mail when they use more than the letter E?" I just made that up, but I would bet you $5 that there is a Family Circus strip with the same or very similar premise.

If someone shows you a Family Circus strip, all you do is force out a chuckle so that person will leave you the hell alone. I honestly think that someone enjoying Family Circus might actually bring about the end of our friendship. I mean, how can I trust their judgement on anything? I wouldn't let them redecorate my house or set me up on a blind date. Their taste cannot be taken seriously.

I've had these pent up emotions towards Family Circus for quite some time but am just now putting them into words because I realized that my local paper could be printing so many better things. They could print an ad or just a big black rectangle. I envision myself saying, "Yea this rectangle seems stupid, but at least it's not Family Circus."
Or they could print Marmaduke. Granted, Marmaduke was rarely funny either, but that dog never made you feel like you weren't reaching your potential or spending enough time with your grandparents. Plus he was so big! A big dog trying to do small dog things (or vice versa) will always amuse me.
- July 11, 2008